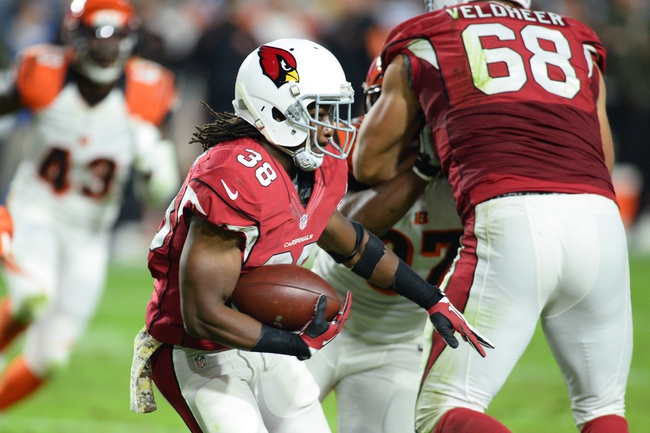 NFL Updates: News From Around the League, Week 16 Schedule and More

The NFL will be getting back to Week 16 this evening, when the Redskins and Eagles kick off in Philadelphia. In the meantime, there’s plenty to talk about, so let’s take our daily look at the headlines and see who’s in the news.

The Cardinals’ Andre Ellington is officially questionable due to his foot injury. That said, the coaching staff says they expect him to play.
Ellington should be able to get back out there after a three-game absence. He’ll get into a change-of-pace role behind David Johnson tomorrow.

In other running back news, the Packers’ Eddie Lacy is probable for this weeks’ game against the Cardinals.
Lacy will form a committee with James Starks and look to get in more touches than he did last week.

Ryan Mallett seems to be the favorite to take the field tomorrow for the Ravens in a big game against the Steelers.
Baltimore has been coy with which QB they’ll trot out there in this divisional game--Mallett or Jimmy Clausen--but the team seems to be preparing for a Mallett-led offense. This is a big game for the Steelers; they need to close out the season with a pair of wins to lock up a playoff spot.

Now let’s check out a couple of Seahawks wide receivers. First there’s Jermaine Kearse. He’s probable with his calf injury and should be good to go for tomorrow. Kearse got in a full practice the past few days.
As for Doug Baldwin, he’s questionable due to a hamstring injury. He’ll be a game-time decision in all likelihood.

Both Ben Watson (knee) and Marques Colston (chest) are questionable for tomorrow against the Jaguars.
We’re probably looking at game-time decisions here, but if either can hit the field it’s a great matchup.

Both Brandon LaFell and Danny Amendola are listed as questionable for the Patriots tomorrow. LaFell seems to have a slightly better chance at taking the field against the Jets, but we’ll see at game time.
As for WR Julian Edelman, he’s listed as doubtful with that foot injury. That’s great news for the Jets, who somehow need to pull off an upset here if they want to keep their playoff hopes alive.

NFL Week 16 Schedule: Let’s take a look at the upcoming round of games on the NFL schedule, along with the start times and TV networks you can catch them on.

The pick in this article is the opinion of the writer, not a Sports Chat Place site consensus.
Previous Pick
San Diego Chargers at Oakland Raiders 12/24/15 NFL Score, Recap, News and Notes
Next Pick
Eagles vs. Redskins - 12/26/15 NFL Pick, Odds, and Prediction