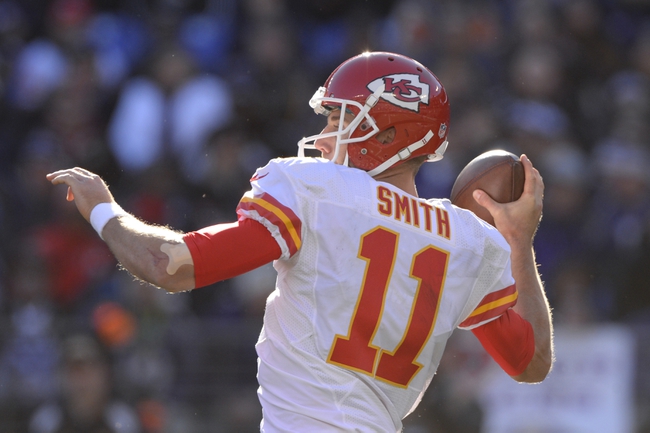 The Cleveland Browns look to play spoiler after a frustrating 3-11 record this season. Johnny Manziel is completing 60.7 percent of his passes for 1,364 yards, seven touchdowns and four interceptions. Manziel has three touchdown passes in his last three games. Gary Barnidge and Travis Benjamin have combined for 1,823 receiving yards and 14 touchdowns while Brian Hartline has 46 receptions. The Cleveland Browns ground game is averaging 86.5 yards per contest, and Isaiah Crowell leads the way with 565 yards and three touchdowns. Defensively, Cleveland is allowing 27.6 points and 387.9 yards per game. Karlos Dansby leads the Browns with 99 tackles, Armonty Bryant has 5.5 sacks and Tramon Williams has 10 pass deflections. Andrew Hawkins, Glenn Winston and Justin Gilbert are questionable.

The Kansas City Chiefs hope to clinch a playoff spot for the third time since the 2010 season. Alex Smith is completing 65.6 percent of his passes for 3,205 yards, 16 touchdowns and four interceptions. Smith has four touchdown passes in his last four games. Jeremy Maclin and Travis Kelce have combined for 1,807 receiving yards and 10 touchdowns while Albert Wilson has 29 receptions. The Kansas City Chiefs ground game is averaging 122.8 yards per contest, and Charcandrick West leads the way with 538 yards and four touchdowns. Defensively, Kansas City is allowing 18.4 points and 335.4 yards per game. Derrick Johnson leads the Chiefs with 100 tackles, Justin Houston has 7.5 sacks and Marcus Peters has 23 pass deflections. De'Anthony Thomas, Jeff Allen and Husain Abdullah are questionable.

The Browns are just a downright mess right now and would be better off losing this game anyway. Meanwhile, the Chiefs are clicking on both sides of the ball and have won six of their last eight games by double digits. It's hard seeing Cleveland keeping this game close given what it has shown us this season.

I'll eat the chalk here even if I don't love big lines.