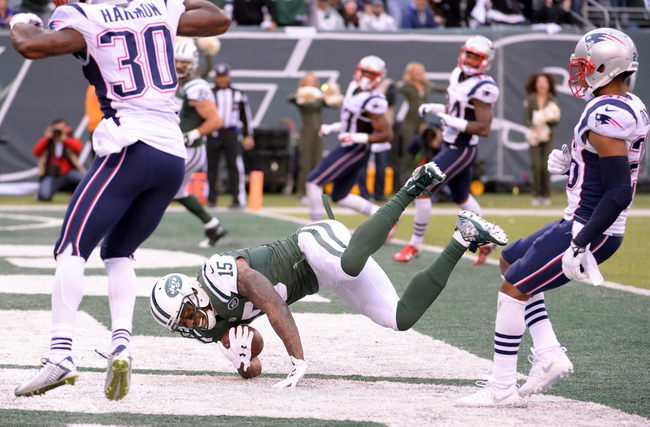 Mixed in with the Week 16 NFL action on Sunday, we had a very important AFC East matchup on the slate between the Patriots and the Jets. New England was coming off a blowout win over the Titans in their last appearance, while the Jets edged out the Cowboys last Saturday in Week 15. This game was absolutely huge as far as playoff potential, as the Jets needed to win to stay alive in the hunt for the postseason.
Let’s take a closer look at some of the key players and stats from this game so we can figure out why things played out the way they did. Afterward we’ll check out what’s ahead for both teams in the final week of the regular season.

What Happened: Things started out fairly slowly in the first quarter as the offenses felt out the other team. The only scoring came from a 30-yard Randy Bullock boot, putting the Jets up 3-0.
In the second, Stephen Gostkowski tied things up with a kick of his own, knocking one in from 35 yards. The Jets were able to retake the lead, however, when Ryan Fitzpatrick hooked up with Brandon Marshall on a 2-yard TD pass. That would make it 10-3 Jets at the break.
After halftime, Fitzpatrick and Marshall struck again, this time on a 33-yard TD hookup. The drive was made possible on a Darrelle Revis interception of Tom Brady.
The Pats showed some real life on the next drive, marching down the field to a 44-yard Gostkowski field goal and a 17-6 score.
New England got a huge break on a scoop-and-score by the defense on the next possession. Fitzpatrick lost the football while attempting to throw and the Pats picked it up and ran it into the end zone for a 17-13 margin. It was the big defensive play they needed and swung the momentum back in their favor.
Bullock bagged another field goal, this one from 49 yards, to put the Jets up by a touchdown. New England responded with a clutch drive at the end of the fourth, ending on a James White 9-yard reception for the tying score. The Jets were unable to make anything of their final drive and we were headed to overtime.
After receiving the kickoff, the Jets drove down the field, ending with a stellar Fitzpatrick pass to Eric Decker to give New York the improbable overtime victory 26-20.
The Steelers lost today as well, giving the Jets the final Wild Card slot at 10-5. A victory next week will get them into the playoffs.

The Stars: Fitzpatrick was great here, logging 296 yards and three touchdowns. His lone blemish was a fumble which wasn’t really his fault.
The main beneficiary in the passing game was Marshall, who hauled in eight passes for 115 yards and two touchdowns.
The New York defense also came up big here as well, holding Brady to 231 yards, one TD and a pick.

The Goats: A bizarre sequence happened during the overtime coin toss. The Patriots won the toss, but inexplicably (and mistakenly) elected to kick off. They would never get to touch the ball in the OT period. You’ll be seeing that one on highlight shows all week.
New England was just 1-of-10 on third downs. That stat alone shows how much they were missing Danny Amendola and Julian Edelman.

Injuries: LT Sebastian Vollmer had to come out of the game in the first quarter, adding to the long list of Patriots injuries. He was ruled out with a leg injury after getting twisted up under a pile at the line.
The Jets weren’t immune to losses of key players, either. Chris Ivory came out in the first quarter, leaving RB duties to Bilal Powell and Stevan Ridley. Ivory would return, however.
Kenbrell Thompkins and Powell were shaken up late as well; Thompkins’ was a non-contact injury that looked pretty bad.

Outlook: Looking ahead to Week 17, both teams will be back in action on Sunday, January 3 at 1:00 PM ET on CBS. The Jets will head to Buffalo to play the Bills, and the Patriots will take their talents to South Beach to visit the Dolphins.