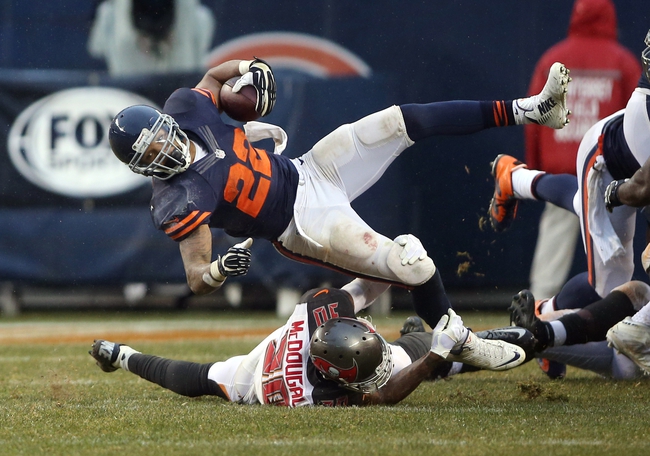 The Tampa Bay Buccaneers and the Chicago Bears face off on Sunday in Week 16 NFL action.

The Tampa Bay Buccaneers are 6-8 this season and they appear to have built something that they can build on for the future. The Buccaneers offense is averaging 22.2 points and 374.2 yards per game with a minus one turnover ratio. Tampa Bay QB Jameis Winston has completed 58.4 percent of his passes with 20 touchdowns and 12 interceptions and he has rushed for five touchdowns. Doug Martin leads the Bucs rushing attack with 1,305 yards and five touchdowns and Mike Evans is the top receiver with 66 catches and three touchdowns. The Tampa Bay defense is allowing 25.2 points and 339.5 yards per game with 11 interceptions, 33 sacks, and 17 fumble recoveries. Lavonte David is the Buccaneers leading tackler with 126, Kwon Alexander has 93, and Gerald McCoy has 7.5 sacks. The future looks very bright in Tampa Bay.

The Chicago Bears are 5-9 this season as they wind down another disappointing year. The Bears offense is averaging 20.6 points and 346.1 yards per game and they are minus four in turnover ratio. Chicago QB Jay Cutler has completed 63.3 percent of his passes with 18 touchdowns and eight interceptions. Matt Forte leads the Bears ground game with 768 yards and four touchdowns and Alshon Jeffery is the top receiver with 54 catches and four touchdowns. The Chicago defense is allowing 25.1 points and 342.1 yards per game with seven interceptions, 30 sacks, and four fumble recoveries. Shea McClellin leads the Bears with 81 tackles, Christian Jones has 76 tackles, and Adrian Amos has 61 tackles. The Bears should be drafting high once again this season.

The Bears appear to have gotten worse in recent weeks and the Bucs have shown their inexperience as well and this should be a tight game so I will take the points with the Bears.