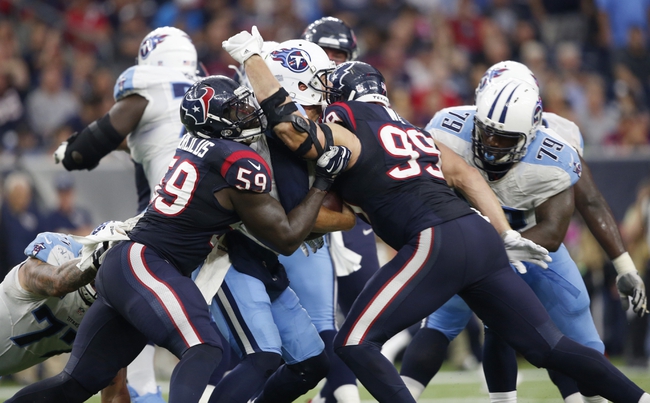 The Tennessee Titans and the Houston Texans face off on Sunday in Week 16 NFL action.

The Tennessee Titans are 3-11 this season but they are clearly a better and more competitive team than they were a season ago. The Titans offense is averaging 19.2 points and 321.4 yards per game and they are minus 11 in turnover ratio. With Tennessee QB Marcus Mariota out Zach Mettenberger starts and he has completed 67.6 percent of his passes with three touchdowns and five interceptions. Antonio Andrews leads the Titans in rushing with 519 yards and three touchdowns and Delanie Walker is the top receiver with 76 receptions and six touchdowns. The Tennessee defense is allowing 25.6 points and 344.1 yards per game with 10 interceptions, 37 sacks, and 10 fumble recoveries. Michael Griffn and Avery Williamson each have 86 tackles to lead the Titans and Wesley Woodyard has 80 tackles. Tennessee will be drafting high once again this season but they are a lot closer to being a competitive team than they were at the start of the year.

The Houston Texas are 7-7 this season and they are in first place in the AFC South and control their own destiny as far as making the playoffs. The Texans offense is averaging 19.6 points and 345.1 yards per game and they are minus one in turnover ratio. It has been a revolving door for Houston QB’ but Brian Hoyer could play in this one if he passes concussion protocol and if not Brandon Weeden os the lielly starter. Alfred Blue leads the Texans in rushing with 551 yards and two touchdowns and DeAndre Hopkins has 97 catches and 10 touchdowns. The Texans defense is allowing 21.5 points and 320.8 yards with 11 interceptions, 36 sacks, and six fumble recoveries. Brian Cushing leads the Texans defense with 103 tackles, J.J. Watt has 66 tackles and 13.5 sacks, and Whitney Mercilus has 8.5 sacks. The Texans defense is what keeps them in game and with the AFC South coming up soft what they have done appears to be good enough.

The total is set t 42 but the defense is the winner here as this one stays under.