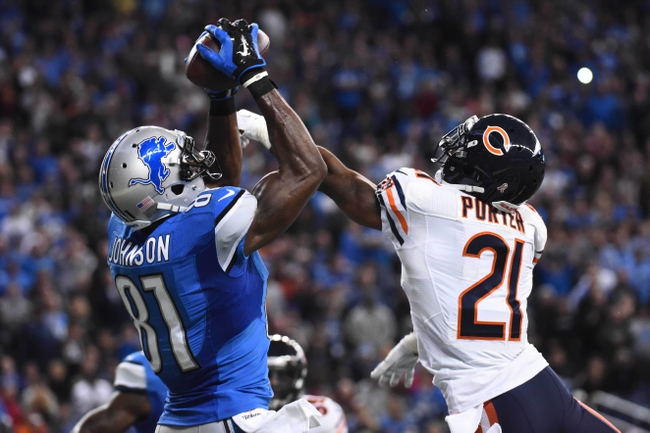 The Detroit Lions and Chicago Bears square off Sunday afternoon in a NFC North showdown at Soldier Field.

The Detroit Lions look to win at least seven games for the third straight season. Matthew Stafford is completing 66.9 percent of his passes for 3,964 yards, 29 touchdowns and 13 interceptions. Stafford has seven touchdown passes in his last three games. Calvin Johnson and Golden Tate have combined for 1,865 receiving yards and 14 touchdowns while Theo Riddick has 76 receptions. The Detroit Lions ground game is averaging 84.5 yards per contest, and Ameer Abdullah leads the way with 553 yards and two touchdowns. Defensively, Detroit is allowing 25.3 points and 350.1 yards per game. Stephen Tulloch leads the Lions with 99 tackles, Ezekiel Ansah has 13.5 sacks and Darius Slay has 13 pass deflections.

The Chicago Bears can win at least seven games for the 10th time in the last 11 seasons. Jay Cutler is completing 63.9 percent of his passes for 3,414 yards, 19 touchdowns and eight interceptions. Cutler has five touchdown passes in his last three games. Alshon Jeffery and Marquess Wilson have combined for 1,271 receiving yards and five touchdowns while Martellus Bennett has 53 receptions. The Chicago Bears ground game is averaging 116.2 yards per contest, and Matt Forte leads the way with 822 yards and four touchdowns. Defensively, Chicago is allowing 24.9 points and 345.2 yards per game. Christian Jones leads the Bears with 82 tackles, Pernell McPhee has six sacks and Tracy Porter has 11 pass deflections. Alshon Jeffery, Eddie Goldman and Bryce Callahan are questionable.

It's always tough to cap the last game of the year between two teams that are better off losing this game in terms of draft position. However, the Bears are at home and probably want to get revenge after losing to Detroit in overtime earlier in the season. Not to mention this line opened with Chicago being the favorite, so we're getting some value with it currently at a pick em.