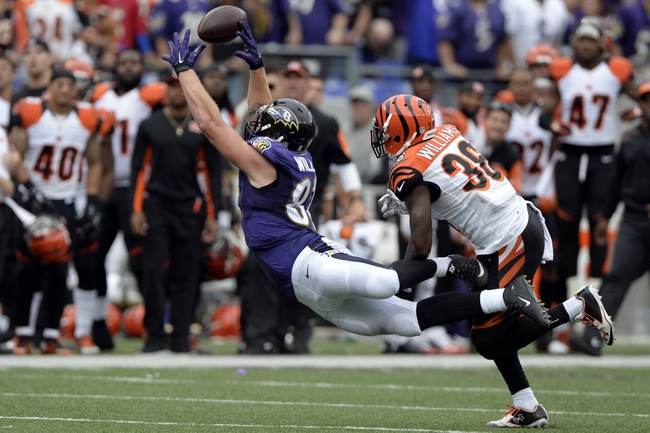 The Cincinnati Bengals and the Baltimore Ravens face off on Sunday in Week 17 NFL AFC North action.

The Cincinnati Bengals are 11-4 this season and hey have wrapped up the AFC North and a spot in the playoffs. The Bengals offense is averaging 27 points and 367.3 yards per game and they have a plus nine turnover ratio. With Andy Dalton out Cincinnati has turned to A.J. McCarron at QB and he has completed 70.2 percent of his passes with three touchdowns and two interceptions. Jeremy Hill leads the Bengals in rushing touchdowns with 10 while Giovanni Bernard leads in rushing yards with 680 and A.J. Green is the top receiver with 77 catches and eight touchdowns. The Bengals defense is allowing 17.4 points and 337.3 yards per game with 19 interceptions, 38 sacks, and nine fumble recoveries. Vincent Rey leads he Bengals in tackles with 93, Carlos Dunlap has 13.5 sacks, and Reggie Nelson has eight interceptions. The Bengals had a chance for a first round playoff bye but they let it slip away on Monday Night in Denver.

The Baltimore Ravens are 5-10 this season and they are coming off of a win that possibly knocked their rivals, the Pittsburgh Steelers, out of the playoffs. The Ravens offense is averaging 20.8 points and 360.5 yards per game and they are minus 13 in turnover ratio. Ryan Mallett has take over as Ravens QB and he has completed 68.3 percent of his passes with a touchdown. Buck Allen leads the Baltimore rushing attack with 478 yards and Kamar Aiken is the top receiver with 70 receptions and five touchdowns. The Ravens defense is allowing 25.1 points and 340.1 yards per game with six interceptions, 34 sacks, and six fumble recoveries. Daryl Smith leads the Ravens in tackles with 118, C.J. Mosley has 104 tackles, and Will Hill has 63 tackles. The Ravens were just decimated by injuries this season.

The total is set at 41.5 but we should see more coring than that so my free pick here is that this one goes over the total.