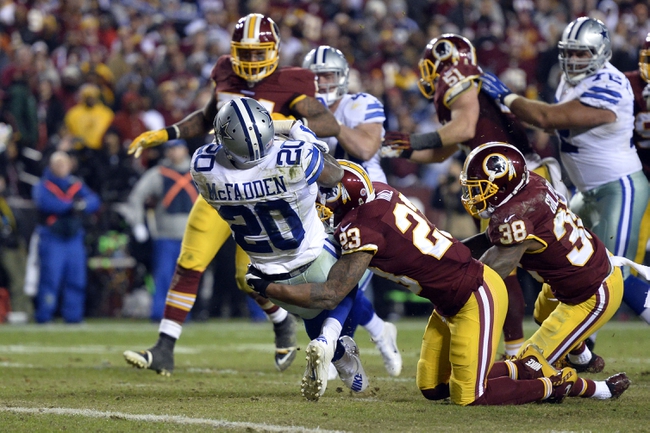 The Dallas Cowboys and the Washington Redskins face off on Sunday in a week 17 NFL NFC East rivalry game.

The Dallas Cowboys are 4-11 and they have watched their dreams of a Super Bowl season fade to a first five pick in the NFL Draft. The Cowboys offense has been horrible averaging 16.8 points and 323.3 yards per game and they are minus 18 in turnover ratio. Kellen Moore got the start for Dallas last week at QB and he has completed 50 percent of his passes with one touchdown and four interceptions. Darren McFadden leads the Cowboys rushing attack with 997 yards and three touchdowns and Jason Witten leads in receptions with 71. The Dallas defense is allowing 22.7 points and 342.2 yards per game wth eight interceptions, 30 sacks, and four fumble recoveries. Sean Lee leads the Cowboys with 128 tackles, Barry Church has 117 tackles, and Demarcus Lawrence has 8.0 sacks. The Cowboys will be searching high and low for a backup QB for next season.

The Washington Redskins are 8-7 this season and they have locked down first place in the NFC East. The Redskins offense is averaging 23.6 points and 348.3 yards per game with a plus one turnover ratio. Washington QB Kirk Cousins has completed 69.5 percent of his passes with 26 touchdowns and 11 interceptions and he has rushed for five touchdowns. Alfred Morris leads the Redskins rushing attack with 651 yards and Jordan Reed leads in receptions with 83 and 11 touchdowns. The Washington defense is allowing 23.7 points and 371.9 yards per game with nine interceptions, 34 sacks, and 21 fumble recoveries. Dashon Goldson leads the Skins with 110 tackles, Will Compton has 90 tackles, and Ryan Kerrigan has 8.5 sacks. Washington has played well down the stretch and they will host a playoff game.

The Cowboys have shown me no reason to have any confidence in them winning let a lone covering four points.