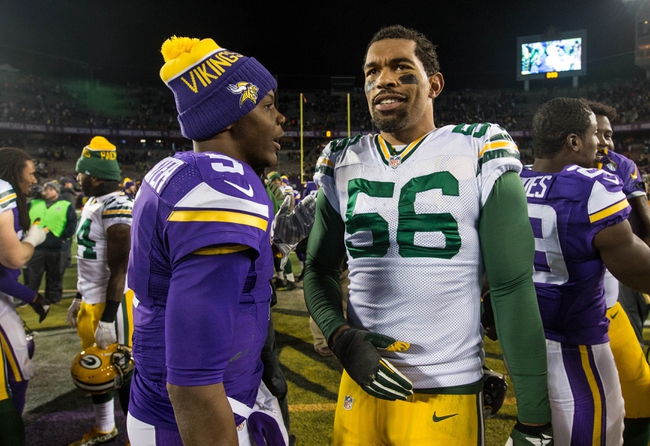 The Minnesota Vikings look to win their first division title since the 2009 season. Teddy Bridgewater is completing 65.9 percent of his passes for 3,132 yards, 14 touchdowns and eight interceptions. Bridgewater has six touchdown passes in his last three games. Stefon Diggs and Kyle Rudolph have combined for 1,207 receiving yards and nine touchdowns while Mike Wallace has 38 receptions. The Minnesota Vikings ground game is averaging 137.3 yards per contest, and Adrian Peterson leads the way with 1,418 yards and 10 touchdowns. Defensively, Minnesota is allowing 19.3 points and 343.8 yards per game. Eric Kendricks leads the Vikings with 83 tackles, Everson Griffen has 8.5 sacks and Terence Newman has 12 pass deflections.

The Green Bay Packers look for their fifth division title since the 2011 season. Aaron Rodgers is completing 60.4 percent of his passes for 3,530 yards, 30 touchdowns and seven interceptions. Rodgers has four passing touchdowns in his last three games. Randall Cobb and James Jones have combined for 1,580 receiving yards and 14 touchdowns while Richard Rodgers has 51 receptions. The Green Bay Packers ground game is averaging 118.3 yards per contest, and Eddie Lacy leads the way with 724 yards and three touchdowns. Defensively, Green Bay is allowing 20.2 points and 353.7 yards per game. Ha Ha Clinton-Dix leads the Packers with 96 tackles, Julius Peppers has 9.5 sacks and Damarious Randall has 14 pass deflections. B.J. Raji, Bryan Bulaga and Sam Shields are questionable.

The Packers at home and the low line in a big game is tempting. However, I have zero confidence in the Packers with all of their injuries on the offensive side of the ball. Green Bay has limited weapons and an offensive line that looks like swiss cheese half the time. The Vikings have a solid defense, can run the ball and have a QB who can manage the game.

I'm not real confident on this game but if forced to pick I'll take the free field goal with the Vikings. This is more of a fade from the Packers who are a shell of themselves right now.