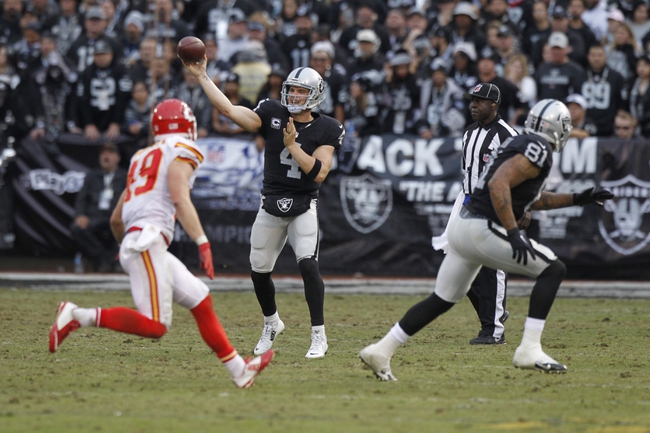 The Kansas City Chiefs and the Oakland Raiders face off on Sunday at Arrowhead Stadium in Week 17 NFL action.

The Kansas City Chiefs have clinched a playoff spot as they have been on an outright roll. The Kansas City offense is averaging 25.5 points and 330.7 yards per game with a plus 15 turnover ratio. Chiefs QB Alex Smith has completed 65.7 percent of his passes with 18 touchdowns and five interceptions. Charcandrick West leads the KC ground attack with 600 yards and seven touchdowns and Jeremy Maclin s the leader in receptions with 84 and seven touchdowns. The Chiefs defense is allowing 18 points and 337.6 yards per game with 21 interceptions, 41 sacks, and 11 fumble recoveries. Derrick Johnson has 106 tackles to lead the Chiefs, Ron Parker has 72 tackles, and Eric Berry has 61 tackles. The Chiefs are a team no one wants to face in the playoffs.

The Oakland Raiders are 7-8 this season and while they aren’t going to the playoffs they are a team headed in the right direction. The Raiders offense is averaging 22.8 points and 342.1 yards per game with a net zero turnover ratio. Oakland QB Derek Carr has completed 60.9 percent of his passes with 31 touchdowns and 12 interceptions. Latavius Murray leads the Raiders rushing attack with 1.035 yards and six touchdowns and Michael Crabtree has 82 catches and eight touchdowns. The Oakland defense is allowing 25.1 points and 365.3 yards per game with 12 interceptions, 37 sacks, and 14 fumble recoveries. Malcolm Smith leads the Raiders in tackles with 117, D.J. Hayden has 67, and Khalil Mack has 15 sacks. The Raiders are going to fall just short of the post season but they are a team to watch next season.

The Chiefs are just rolling and the Raiders are fading so I have to go with the hot hand.