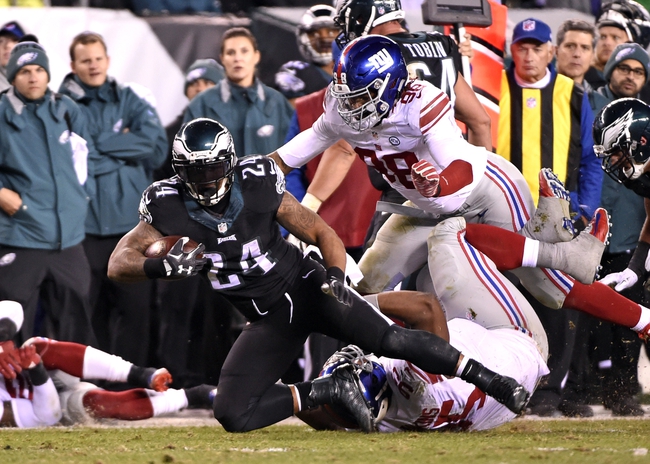 The New York Gants and Philadelphia Eagles face off on Sunday as they play out their 2015 NFL seasons with a NFC East rivalry game.

The New York Giants are 6-9 this season and in most cases they have just looked over matched against the better teams. The Giant offense is averaging 26 points and 363.6 yards per game with a plus six turnover ratio. New York QB Eli Manning has completed 63.1 percent of his passes with 33 touchdowns and 14 interceptions. Rashad Jennings is the Giants top rusher with 693 yards and two touchdowns and Odell Beckham is the top receiver with 91 catches and 13 touchdowns as he returns from his suspension. The Giants defense is allowing 27.1 points and 419.3 yards per game with 14 interceptions, 22 sacks, and 17 fumble recoveries. Landon Collins has 104 tackles, Jonathan Casillas has 82 tackles, and Robert Ayers has 8.0 sacks. The Giants just have a lot of holes to fill before they are able to compete again.

The Philadelphia Eagles are 6-9 this season and clearly one of the biggest disappointments in the NFL. The Eagles offense is averaging 22.8 points and 359.7 yards with a minus four turnover ratio. Philly QB Sam Bradford has completed 64 percent of his passes with 17 touchdowns and 13 interceptions. DeMarco Murray is the Eagles top rusher with 633 yards and five touchdowns and Jordan Matthews is the top receiver with 78 catches and six touchdowns. The Eagles defense is allowing 26.7 points and 394.9 yards per game with 15 interceptions, 35 sacks, and 17 fumble recoveries. Malcolm Jenkins leads Philadelphia with 100 tackles, Mychal Kendricks has 77 tackles, and Fletcher Cox has 9.5 sacks. The Eagles are in for big changes this offseason.

The Giants are horrible as are the Eagles but I see this as one of those spots is the best place to be is with the points.