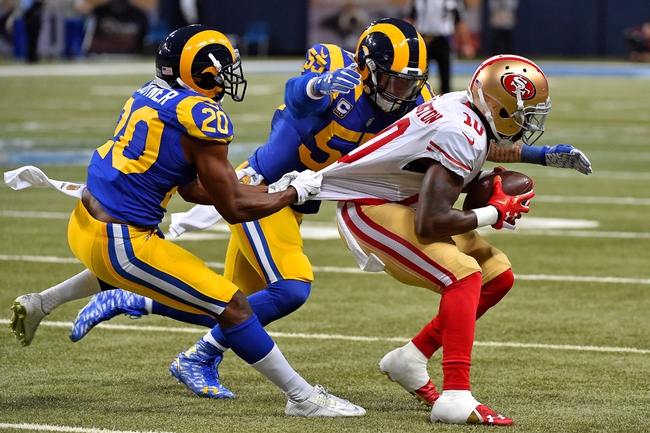 The San Francisco 49ers and the St. Louis Rams face off on Sunday as hey close out their 2015 NFL seasons.

The San Francisco 49ers are 4-11 this season and are in full rebuilding mode. The Niners offense is averaging 14.6 points and 293.5 yards per game and they have a minus four turnover ratio. San Francisco QB Blaine Gabbert has completed 63 percent of his passes with nine touchdowns and six interceptions. DuJuan Harris is now the 49ers running back and he averaging 6.6 yards per carry so far while Anquan Boldin is he top receiver with 64 catches. The San Francisco defense is allowing 24.7 points and 389 yards per game with nine interceptions, 28 sacks, and four fumble recoveries. NaVorro Bowman has 145 tackles the lead the 49ers, Michael Wilhite has 85 tackles, and Eric Red has 69 tackles. The 49ers should get some help in the NFL draft where they will be picking early.

He St. Louis Rams are 7-8 this season but they are going to fall shot of expectations. The Rams offense is averaging 17.6 points and 293.3 yards per game and they have a plus four turnover ratio. Case Keenum has taken over as the St. Louis QB and he has completed 61.4 percent of his passes with four touchdowns and one interception. Todd Gurley leads the Rams rushing attack with 1,108 yards and 10 touchdowns and Tavon Austn is the top receiver with 47 caches and five touchdowns. The Rams defense is allowing 20.7 points and 361.9 yards per game with 12 interceptions, 40 sacks, and 20 fumble recoveries. Mark Barron and James Laurinaitis each have 108 tackles to lead the Rams and Aaron Donald has 11 sacks. The Rams will once again be spending the offseason trying to find the missing pieces.

The 49ers offense just isn’t good enough and the Rams make it to .500 with the win and cover.

The pick in this article is the opinion of the writer, not a Sports Chat Place site consensus.
Previous Pick
Week 17 NFL Survivor Pool Picks
Next Pick
Minnesota Vikings at Green Bay Packers 1/3/16 NFL Score, Recap, News and Notes