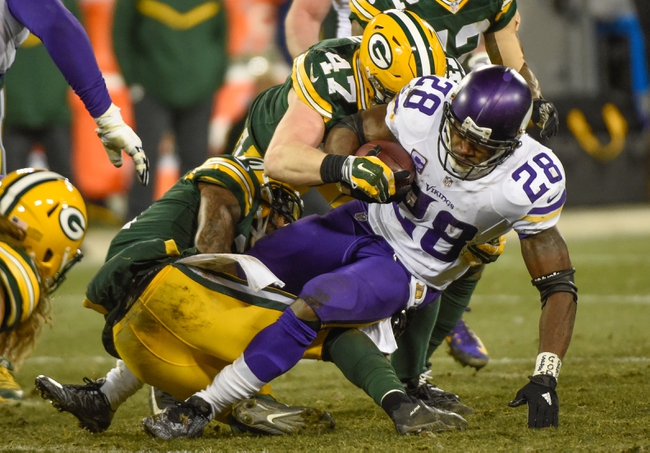 In our final edition of “Sunday Night Football,” we had a winner-take-all Week 17 matchup between the Vikings and the Packers. Minnesota was coming off a total beat-down of the Giants in their last appearance, while Green Bay was stomped by the Cardinals in Week 16. Both of these teams were playoff-bound, but the winner would be crowned the NFC North champions.
Let’s take a closer look at some of the notable players and stats from this game so we can figure out why things happened the way they did. Afterward we’ll check out what’s ahead in the first round of the playoffs for both teams.

What Happened: Both offenses were pretty tepid in this one during the first half. The Vikings got on the board first with a Blair Walsh field goal from 39 yards out. Green Bay responded with a Mason Crosby boot from 28 yards away, and we were tied 3-3 after one.
In the second, Walsh had the only score of the quarter on a 32-yard boot. That made it 6-3 Vikings at halftime.
After the break, Adrian Peterson capped a drive with a 3-yard TD run for the first end zone trip of the game. Shortly afterward, Captain Munnerlyn scooped up a fumble and returned it 55 yards to the house. The Packers were in trouble heading into the fourth at 20-3.
Green Bay showed some life in the final quarter, scoring on a Richard Rodgers TD catch from Aaron Rodgers from 16 yards out. Crosby made another boot from 43 yards to get the Packers within one score at 20-14, but that would be the last points the Packers could muster.
Minnesota goes on to take the NFC North championship at 11-5 and will host a playoff game next week. The Packers finish 10-6 and have to settle for a Wild Card berth.

The Stars: Peterson played pretty well here. He posted 19 attempts for 67 yards and a touchdown. That said, this was mostly a defensive effort. Minnesota held Green Bay to a 2-of-15 mark on third downs and 76 net yards rushing. They tallied a pick, a fumble recovery and touchdown for an all-around great evening.

The Goats: The Green Bay offense is a shell of its former self. They try to rely more on the run these days, however Eddie Lacy had just 13 attempts for 34 yards. James Starks didn’t fare much better with eight totes for 24 yards.
The Packers will have to rely on their defense in the playoffs, which is something of a foreign concept.

Injuries: Peterson left during the third quarter due to a lower back injury, but was able to return late in the fourth. He had an X-ray done; we’ll get more information on him as the week progresses. He seems okay, though.

Outlook: Both teams play again on Sunday in the first round of the playoffs. The Vikings will host the Seahawks (1:05 PM ET on NBC), while the Packers will head to D.C. to visit the Redskins (4:40 PM ET on FOX).