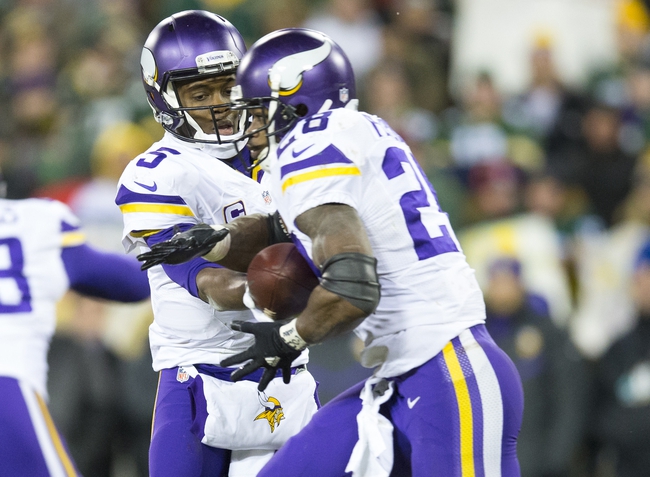 We’ve got just one more day to wait before the NFL Playoffs officially begin, and the anticipation is nearing fever-pitch. In the meantime, let’s take our daily look at some of the notable players and situations out there right now.

The Vikings’ Adrian Peterson was out of practice again yesterday, thanks to his back injury.
Peterson was out for a good chunk of time in the second half during Week 17 and could be in danger of missing time this weekend as well. We expect him to play, but he probably won’t be very effective given his injury and the sub-zero temperatures.

In other NFC RB news, the Redskins’ Matt Jones was limited yesterday in practice with a hip issue.
No one’s got much hope that Jones will play on Sunday against the Packers, so the RB duties will fall to Alfred Morris and Chris Thompson alone.

Colin Kaepernick had surgery on his left knee this week, giving him three surgeries he’s now recovering from.
Kaepernick had shoulder and thumb surgery within the last two months, so he’s got a lot of healing up to do this off-season. The big one is his shoulder; he’ll need 4-6 months before he’s good to go from that.

Peyton Manning has been named the Broncos’ starter for the playoffs, which really isn’t all that surprising.
With Brock Osweiler struggling in Week 17, Manning stepped onto the field for the first time since Week 10 and led the team to a victory. He’ll be leaning on the running game and defense more than usual, but Manning under center is the most promising scenario for the Broncos.

Patriots offensive coordinator Josh McDaniels is reportedly very interested in the Titans head coaching job.
Tennessee has a lot of appeal for prospective coaching candidates, as their QB situation is solid and they’ve got a few cornerstones on both sides of the ball. McDaniels will be one of the leading candidates for this job, but we’ll have to wait a little while to see if he’ll get in there or not.