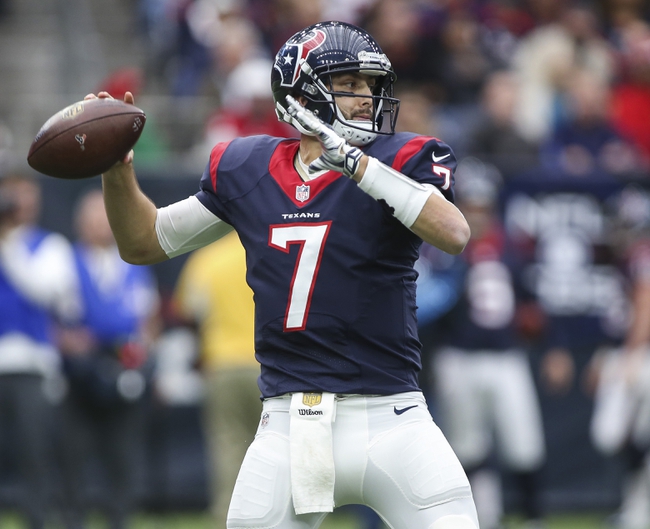 The Kansas City Chiefs hope to get out of the wild card spot for the first time since 2003. Alex Smith is completing 65.3 percent of his passes for 3,486 yards, 20 touchdowns and seven interceptions. Smith has five touchdown passes in his last three games. Jeremy Maclin and Travis Kelce have combined for 1,963 yards and 13 touchdowns while Albert Wilson has 35 receptions. The Kansas City Chiefs ground game is averaging 127.8 yards per contest, and Charcandrick West leads the way with 634 yards and four touchdowns. Defensively, Kansas City is allowing 17.9 points and 329.3 yards per game. Derrick Johnson leads the Chiefs with 116 tackles, Justin Houston has 7.5 sacks and Marcus Peters has eight interceptions. Mitch Morse, Dee Ford and Husain Abdullah are questionable.

The Houston Texans look for their third playoff victory in franchise history. Brian Hoyer is completing 60.7 percent of his passes for 2,606 yards, 19 touchdowns and seven interceptions. Hoyer has four touchdown passes in his last three games. DeAndre Hopkins and Nate Washington have combined for 2,179 receiving yards and 15 touchdowns while Cecil Shorts III has 42 receptions. The Houston Texans ground game is averaging 108.2 yards per contest, and Alfred Blue leads the way with 698 yards and two touchdowns. Defensively, Houston is allowing 19.6 points and 310.2 yards per game. Brian Cushing leads the Texans with 110 tackles, J.J. Watt has 17.5 sacks and Johnathan Joseph has 22 pass deflections. Cecil Shorts, Jadeveon Clowney and Jeoffrey Pagan are questionable.

Everybody keeps talking about the Chiefs winning streak, but they've beaten just two teams during that stretch with winning records. One was against the Steelers without Big Ben and the other was against the Broncos with a banged up and horrible Peyton Manning. I'm not impressed. I love the Texans defense and think the home crowd will help as well. I also don't trust Andy Reid in big games. Give me the Texans and the free field goal, as I think Houston will win this outright.

The pick in this article is the opinion of the writer, not a Sports Chat Place site consensus.
Previous Pick
NFL News: Player News and Updates for 1/9/16
Next Pick
Cincinnati Bengals vs. Pittsburgh Steelers NFL AFC Wildcard Playoff - 1/9/16 NFL Pick, Odds, and Prediction