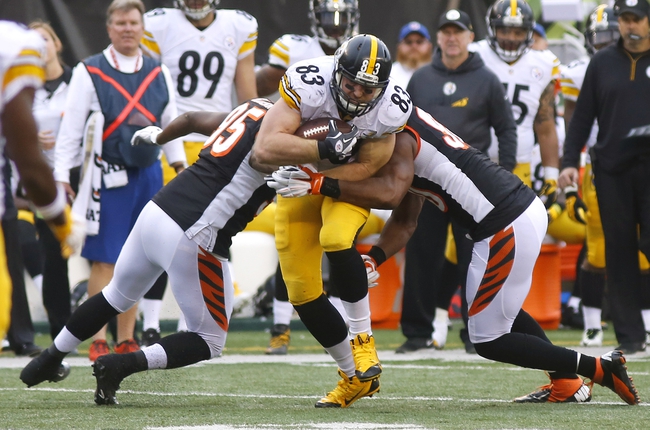 The Cincinnati Bengals and the Pittsburgh Steelers face off on Saturday at Paul Brown Stadium in an AFC NFL Wildcard Playoff match up.

The Cincinnati Bengals finished the regular season at 12-4 and it was good enough to win the AFC North but a few stumbles down the stretch and they are playing in the first round. The Bengals offense is averaging 26.2 points and 358 yards per game with a plus 11 turnover ratio. Cincinnati is preparing for A.J. McCarron to start this game as Andy Dalton has had his hand removed from his cast but both have completed 66 percent of their passes but Dalton has a better grasp of the system and is the starter if healthy. Jeremy Hill leads the Bengals in rushing touchdowns with 11 and he has gained 794 yards while A.J. Green has 86 receptions and 10 touchdowns. The Bengals defense is allowing 17.4 points and 340.8 yards per game with 21 interceptions, 42 sacks, and 10 fumble recoveries. Vincent Rey leads the Cincinnati defense with 98 tackles, Reggie Nelson has 77 tackles and eight interceptions, and Carlos Dunlap has 13.5 sacks. The Bengals were roughed up by the Steelers a few weeks ago and they would love to pay them back here.

The Pittsburgh Steelers needed until the final week of the season to make the field for this year’s NFL Playoffs but they start with a clean slate and are still alive to make the Super Bowl. The Steelers are averaging 26.4 points and 395.4 yards per game and they have a plus two turnover ratio. Pittsburgh QB Ben Roethlisberger has completed 68 percent of his passes with 21 touchdowns and 16 interceptions. DeAngelo Williams leads the Steelers ground attack with 907 yards and 11 touchdowns and Antonio Brown is the top receiver with 136 receptions and 10 touchdowns. The Pittsburgh defense is allowing 19.9 points and 363.1 yards per game with 17 interceptions, 48 sacks, and 16 fumble recoveries. Lawrence Timmons is the Steelers top tackler with 119 tackles, Ryan Hazier has 87 tackles, and Cameron Heyward has 7.0 sacks. The Steelers have been up and down all season and after splitting with the Bengals this season they want nothing more than another win in Cincinnati.

The total is set at 46.5 and dropping but I see offense in this one and I have it going over the total and the over is my free pick. My stronger play is on who will win against the spread and I will post that in the Premium Area.