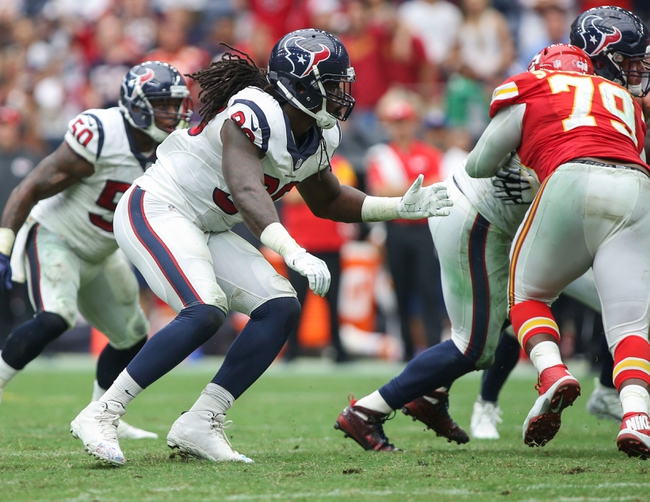 The Houston Texans are the Kansas City Chiefs face off on Saturday at NRG Stadium as they kick off the NFL Playoffs.

The Houston Texans finished the NFL season at 9-7 and that was good enough to win the AFC South. The Texans offense is averaging 21.2 points and 347.8 yards per game and they are plus five in turnover ratio. Houston has had a slew of injuries at QB but Brian Hoyer will get the start for this game and for the season he has completed 60.7 percent of his passes with 19 touchdowns and seven interceptions. Alfred Blue leads the Texans rushing attack with 696 yards and two touchdowns and DeAndre Hopkins has established himself as one of the top receivers in the NFL with 111 catches and 11 touchdowns. The Texas defense is allowing 19.6 points and 310.2 yards per game with 14 interceptions, 45 sacks, and 12 fumble recoveries. Brian Cushing leads the Texans defense with 110 tackles, J.J. Watt has 76 tackles and 17.5 sacks, and Bernardrick McKinney has 63 tackles. The Texans earned their way in winning seven of their last nine games.

The Kansas City Chiefs are 11-5 this season and they are one of the NFL’s hottest teams winning their last five games. Kansas City’s offense is averaging 25.3 points and 331.2 yards per game and they are plus 14 in turnover ratio. KC QB Alex Smith has completed 65.3 percent of his passes with 20 touchdowns and seven interceptions. Charcadrick West leads the Chiefs’ ground attack with 634 yards and four touchdowns and Jeremy Maclin is the top receiver with 87 catches and eight touchdowns and Travis Kelce has 72 catches and five touchdowns. The Kansas City defense is allowing 17.9 points and 329.3 yards per game with 22 interceptions, 47 sacks, and 13 fumble recoveries. Derrick Johnson has 116 tackles to lead the Chiefs, Ron Parker has 78 tackles, and Justin Houston has 7.5 sacks. The defense has set up the offense for the Chiefs this season.

Like most traditional playoff teams these teams have defenses that lead the way and set up the offense but these two are loaded with sack masters and takeaway artists as well. Points (and yards) are going to be tough to come by so my free pick is going to be under the total. I will have a pick against the spread in this one as well that I will post in the Premium Area.

The pick in this article is the opinion of the writer, not a Sports Chat Place site consensus.
Previous Pick
NFL News: Player News and Updates for 1/9/16
Next Pick
Cincinnati Bengals vs. Pittsburgh Steelers NFL AFC Wildcard Playoff - 1/9/16 NFL Pick, Odds, and Prediction