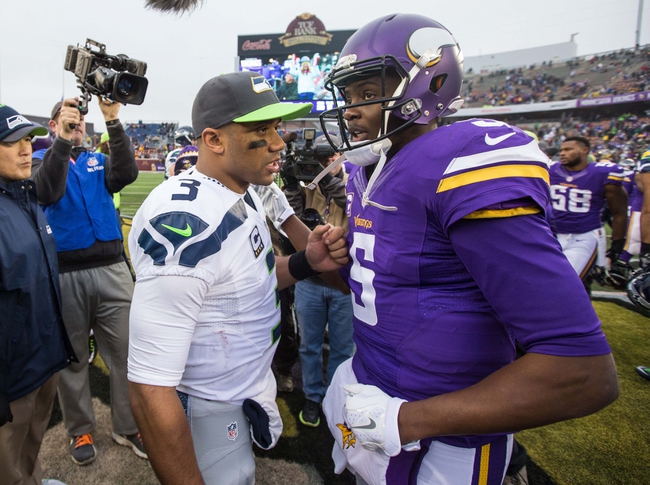 The Seattle Seahawks have not lost a wild card game since the 2004 season. Russell Wilson is completing 68.1 percent of his passes for 4,024 yards, 34 touchdowns and eight interceptions. Wilson has eight touchdown passes in his last three games. Doug Baldwin and Jermaine Kearse have combined for 1,754 receiving yards and 19 touchdowns while Tyler Lockett has 51 receptions. The Seattle Seahawks ground game is averaging 141.8 yards per contest, and Wilson leads the way with 553 yards and one touchdown. Defensively, Seattle is allowing 17.3 points and 291.8 yards per game. K.J. Wright leads the Seahawks with 116 tackles, Michael Bennett has 10 sacks and Richard Sherman has 14 pass deflections. Jeremy Lane and Kam Chancellor are questionable.

The Minnesota Vikings look for their first playoff victory since the 2009 season. Teddy Bridgewater is completing 65.3 percent of his passes for 3,231 yards, 14 touchdowns and nine interceptions. Bridgewater has five passing touchdowns in his last three games. Stefon Diggs and Kyle Rudolph have combined for 1,215 receiving yards and nine touchdowns while Mike Wallace has 39 receptions. The Minnesota Vikings ground game is averaging 138.2 yards per contest, and Adrian Peterson leads the way with 1,485 yards and 11 touchdowns. Defensively, Minnesota is allowing 18.9 points and 344.2 yards per game. Eric Kendricks leads the Vikings with 92 tackles, Everson Griffen has 10.5 sacks and Terence Newman has 12 pass deflections. Linval Joseph is questionable with a toe injury.

I've had trouble figuring out the Vikings this season, but I'm not sold on the Seahawks at all, especially on the road. Seattle has trouble protecting Wilson and the weather is going to be downright brutal. I think the Vikings have a shot to win this outright. However, at the very least, it should be low scoring, so the points should come in handy.

The pick in this article is the opinion of the writer, not a Sports Chat Place site consensus.
Previous Pick
NFL News: Player News and Updates for 1/11/16
Next Pick
Top Five Takeaways From the 2016 NFL Wild Card Weekend