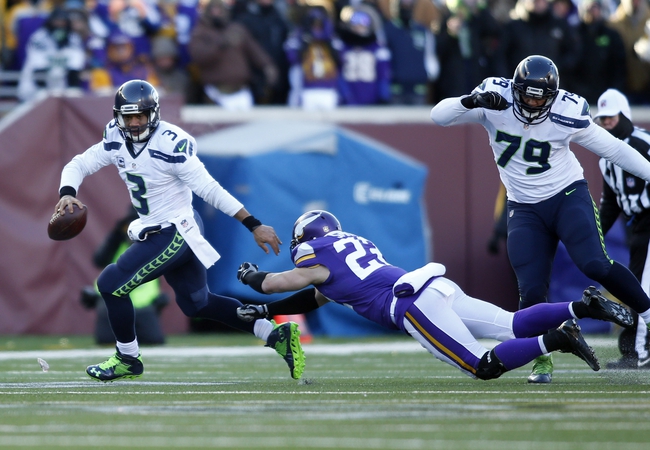 Kicking off the Sunday NFC action on the NFL’s Wild Card Weekend, We had a battle between the Seahawks and Vikings for the right to move on to the Divisional Round next weekend. Seattle finished 10-6 and earned a Wild Card this year, while Minnesota had a nice run at 11-5 and took the NFC North division. This figured to be a low-scoring game where points were at a premium, and that’s certainly what it was.
Let’s check out some of the key players and stats from this game so we can figure out why things happened the way they did. Afterward we’ll look ahead to see what’s in store for both teams.

What Happened: The big story here was the weather, and everyone was talking about it all week. It was officially the third-coldest game in NFL history, with negative temperatures on the field. This made passing, catching and kicking extra tough and kept the offenses in check.
That fact was readily evident in the first half score of 3-0 Vikings. The lone tally came on a 22-yard Blair Walsh field goal in the first quarter.
After halftime, Walsh posted two more field goals in the third for a 9-0 score. One was from 43 yards and the other from 47.
In the fourth, the Seahawks finally got on the board with a 3-yard pass from Russell Wilson to Doug Baldwin. They were able to take the lead later in the quarter with a 46-yard Steven Hauschka field goal, and it was 10-9 on the Vikings’ final drive.
Aided by a big pass interference penalty, Minnesota was able to drive down into position for a late field goal. Walsh lined up what was essentially a chip-shot field goal but kicked into the laces and hooked it left.
The Seahawks wind up with a shocking 10-9 victory and will move on to the Divisional Round next weekend. This was only the third time in NFL playoffs history that a team has been held scoreless through three quarters and ended up winning.

The Stars: Wilson’s stats aren’t that great (142 yards, TD, INT), but he did some great scrambling to evade the Vikings rush. Christine Michael held it down on the ground with 21 rushes for 70 yards.
The Seahawks defense held the Minnesota offense to just three field goals and were able to come up with a fumble recovery.

The Goats: Most of the blame here will fall on Walsh, but the Vikings shouldn’t have been in that position anyway. They blew several big opportunities in taking down Wilson on defense and couldn’t get into the end zone on offense.
The Vikings offense posted just 183 net yards and was 3-of-13 on third down attempts.

Injuries: The big injury story heading into this one was the status of Seahawks RB Marshawn Lynch, who didn’t make the trip to Minnesota due to his abdomen injury. There seems to be a good chance that he’ll be able to take the field in the Divisional Round, but we’ll see what happens between now and then.

Outlook: Next weekend, the Seahawks will head to Carolina to face a formidable foe in the Panthers. That one is Sunday, January 17 at 1:05 PM ET on FOX.
As for the Vikings, they’ll take a very tough loss into the off-season. This one will sting for a long time, but with a few tweaks they could be back in the playoffs next year.