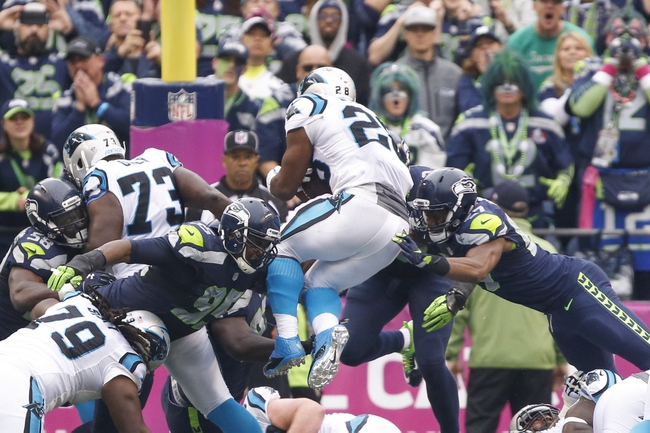 The Carolina Panthers and the Seattle Seahawks face off on Sunday in an NFC NFL Divisional Playoff game.

The Carolina Panthers are the top seed in the NFC and after getting a bye in the first round of the NFL playoffs they take to the field in their quest of the Super Bowl.  The Panthers finished the season with the best record in the NFL going 15-1 with their lone loss coming to the Falcons in Atlanta. The Carolina offense led the NFL in points per game with 31.2 and they also averaged 366.9 yards and had a plus 20 turnover ratio. Panthers QB Cam Newton had a MVP type season completing 59 percent of his passes with 35 touchdowns and 10 interceptions and he rushed for 636 yards and 10 touchdowns. Jonathan Stewart was the Panthers top rusher despite missing several games rushing for 989 yards and six touchdowns and Greg Olsen led in receptions with 77 and seven touchdowns while Ted Ginn had 44 catches and 10 touchdowns. The Carolina defense allowed 19.2 points and 322.9 yards per game with 24 interceptions, 44 sacks, and 22 fumble recoveries. Luke Keuchly leads the Panthers defense with 118 tackles, Thomas Davis had 1-5 tackles, Kawann Short had 11 sacks, and Josh Norman emerged as one of the top lock down corners in the NFL. The Panthers haven’t gotten a lot of respect this season despite the record and this post season is their chance to earn respect.

The Seattle Seahawks went 10-6 this season and they earned their way to this game with a win over the Minnesota Vikings last week in the Wildcard round of the playoffs. The Seahawks are looking to go to the Super Bowl for the third year in a row and despite winning last week on a Vikings missed field goal it was their play up until that point that put them in position to win. The Seahawks offense is averaging 26.4 points and 378.6 yards per game and they had a plus seven turnover ratio. Seattle QB Russell Wilson completed 68.1 percent of his passes this season with 34 touchdowns and eight interceptions and he rushed for 553 yards and a score. Seattle has used a variety of players to rush the football but it looks like Marshawn Lynch might be ready to go this week and that should be a big injection of life to the Seahawks offense while Doug Baldwin has been the top receiver with 78 catches and 14 touchdowns and Tyler Lockett has 51 catches with six touchdowns. The Seahawks defense allowed a NFL best 17.3 points per game and a second best 291.8 yards with 14 interceptions, 37 sacks, and 18 fumble recoveries. K.J. Wright leads the Seahawks with 116 tackles, Bobby Wagner has 114 tackles, and Michael Bennett has 10 sacks. The Seahawks have been one of the hottest teams in the NFL in recent weeks but they are up against the team that has been hottest all season.

The total in this one is set at 44 but I see points being very tough to come by and my play here has to be the under.