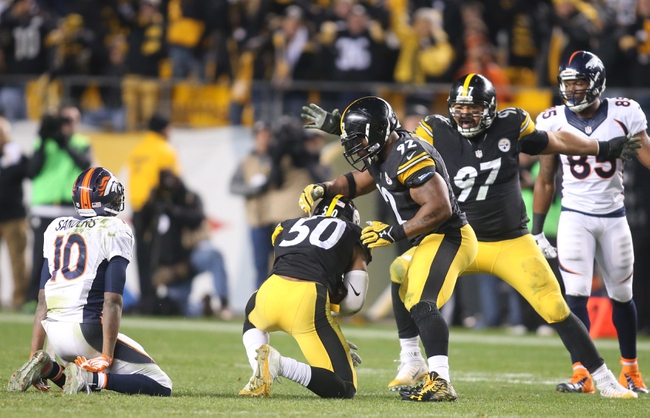 The Denver Broncos and the Pittsburgh Steelers face off on Sunday in Denver in an AFC Divisional Playoff Game.

The Denver Broncos finished 12-4 this season and that was good enough to earn them home field advantage in the AFC. The Broncos offense is averaging 22.2 points and 355.5 yards per game and they have a minus four turnover ratio. Denver QB Peyton Manning looked shot early in the season and then was injured and missed plenty of action but when they needed him in week 17 against San Diego it was a vintage performance rallying Denver to the win. Ronnie Hillman leads the Broncos rushing attack with 863 yards and seven touchdowns and Demaryius Thomas is the top receiver with 105 receptions and six touchdowns. The Broncos defense is allowing 18.5 points and 283.1 yards per game with 14 interceptions, 52 sacks, and 22 fumble recoveries. Danny Trevathan is Denver’s leading tackler with 109, Brandon Marshall has 102 tackles, and Vonn Miller has 11 sacks. The Broncos beat the Patriots straight up and if they win they will host them again but this time in the AFC Championship game.

The Pittsburgh Steelers earned their way into this game with a controversial win over the Cincinnati Bengals in the AFC Wildcard round. The Steelers are 11-6 so far this season and but they are banged up and have played most of the season missing key pieces. The Pittsburgh offense is averaging 26.4 points and 395.4 yards per game with a plus two turnover ratio. Ben Roethlisberger was knocked out of last week’s game only to return but he has been cleared to play here after completing 68 percent of his passes with 21 touchdowns and 16 interceptions this season. The Steelers have gone through several running backs but last week they got a solid performance from Fitzgerlad Tousssaint and Jordan Todman and they will be without top receiver Anthony Brown so they will need Markus Wheaton and Martavius Bryant to step up. The Steelers defense is allowing 19.9 points and 363.1 yards per game with 17 interceptions, 48 sacks, and 16 fumble recoveries. Lawrence Timmons is Pittsburgh’s leading tackler with 119, Ryan Shazier has 87, and Will Allen and Mike Mitchell each have 80 tackles. The question is just how much do the Steelers have left in the tank.

This one could be wide open and I expect more scoring than the odds suggest so my free pick here will be the over.

The pick in this article is the opinion of the writer, not a Sports Chat Place site consensus.
Previous Pick
Seattle Seahawks at Carolina Panthers 1/17/16 NFL Score, Recap, News and Notes
Next Pick
Seahawks at Panthers - 1/17/16 NFL Divisional Round Pick, Odds, and Prediction