Seahawks at Panthers - 1/17/16 NFL Divisional Round Pick, Odds, and Prediction 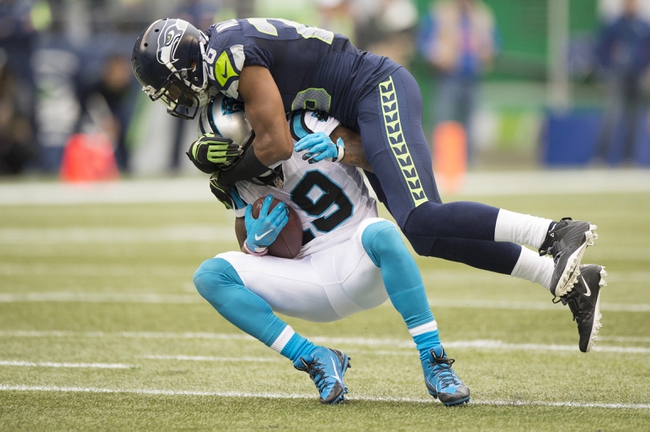 The Seattle Seahawks and Carolina Panthers meet Sunday in the divisional round of the playoffs at Bank of America Stadium.

The Seattle Seahawks hope to reach their third straight conference championship with a victory. Russell Wilson is completing 50 percent of his passes for 142 yards, one touchdown and one interception. Wilson has six touchdown passes in his last three games. Doug Baldwin and Tyler Lockett have combined for 77 receiving yards and one touchdown while Fred Jackson has two receptions. The Seattle Seahawks ground game is averaging 97 yards per contest, and Christine Michael leads the way with 70 yards on 21 carries. Defensively, Seattle is allowing nine points and 183 yards per game. Bobby Wagner leads the Seahawks with eight tackles, Cliff Avril has one sack and Earl Thomas has one pass deflection. Marshawn Lynch and Luke Willson are questionable.

The Carolina Panthers hope to reach their first conference championship since the 2005 season. Cam Newton is completing 59.8 percent of his passes for 3,837 yards, 35 touchdowns and 10 interceptions. Newton has seven touchdown passes in his last three games. Greg Olsen and Ted Ginn Jr. have combined for 1,843 receiving yards and 17 touchdowns while Jerricho Cotchery has 39 receptions. The Carolina Panthers ground game is averaging 142.6 yards per game, and Jonathan Stewart leads the way with 989 yards and six touchdowns. Defensively, Carolina is allowing 19.3 points and 322.9 yards per game. Luke Kuechly leads the Panthers with 118 tackles, Kawann Short has 11 sacks and Josh Norman has 18 pass deflections. Jonathan Stewart, David Mayo and Foswhitt Whittaker are questionable.

I said last week that I don't like this Seahawks team, and honestly, they shouldn't even be playing this week. Regardless, I don't think it's a secret that the Panthers are easily the better team, especially when you add the rest factor. I think this is an easy pick once you add the small chalk. Give me the Panthers to roll in this game.