Steelers at Broncos - 1/17/16 NFL Divisional Round Pick, Odds, and Prediction 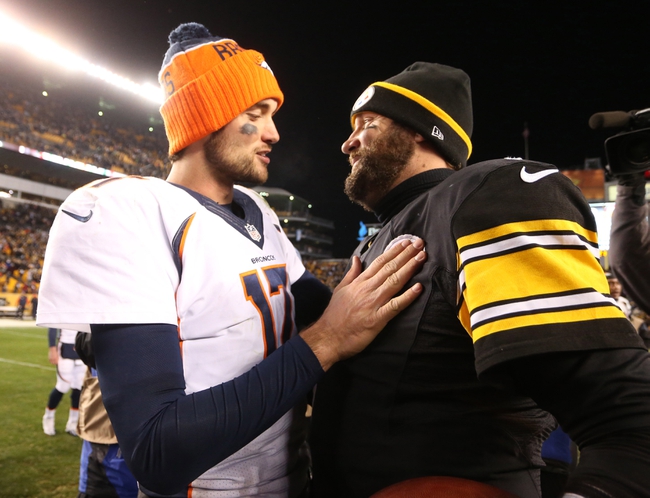 The Pittsburgh Steelers and Denver Broncos meet Sunday in a divisional round playoff game at Sports Authority Field at Mile High.

The Pittsburgh Steelers look to reach their third conference championship under coach Mike Tomlin. Ben Roethlisberger is completing 58.1 percent of his passes for 229 yards, one touchdown and zero interceptions. Roethlisberger is questionable with a shoulder injury. Antonio Brown and Fitzgerald Toussaint have combined for 179 receiving yards while Martavis Bryant has five receptions. The Pittsburgh Steelers ground game is averaging 167 yards per contest, and Jordan Todman leads the way with 65 yards on 11 carries. Defensively, Pittsburgh is allowing 16 points and 279 yards per game. Ryan Shazier leads the Steelers with 13 tackles, Jarvis Jones has one sack and Antwon Blake has one interception. Antonio Brown, DeAngelo Williams and Wil Johnson are questionable.

The Denver Broncos look to reach their second conference championship in the last three seasons. Peyton Manning is completing 59.8 percent of his passes for 2,249 yards, nine touchdowns and 17 interceptions. Manning has two touchdown passes in his last four games. Demaryius Thomas and Emmanuel Sanders have combined for 2,439 receiving yards and 12 touchdowns while Owen Daniels has 46 receptions. The Denver Broncos ground game is averaging 107.4 yards per contest, and Ronnie Hillman leads the way with 863 yards and seven touchdowns. Defensively, Denver is allowing 18.5 points and 283.1 yards per game. Danny Trevathan leads the Broncos with 110 tackles, Von Miller has 11 sacks and Aqib Talib has 13 pass deflections. Demarcus Ware and Omar Bolden are questionable.

Nearly the entire Steelers offense is banged up, and they have a very limited running game. That's not a good formula when going up against the best defense in the NFL. i also like the fact Peyton is back on the field. Even though Manning was awful this season, it's hard to bet against him when he's had over a month to heal and refresh. I'll take the Broncos by a touchdown, as I love Denver's defense and hate the fact Pittsburgh is so banged up.

The pick in this article is the opinion of the writer, not a Sports Chat Place site consensus.
Previous Pick
Seattle Seahawks at Carolina Panthers 1/17/16 NFL Score, Recap, News and Notes
Next Pick
Seahawks at Panthers - 1/17/16 NFL Divisional Round Pick, Odds, and Prediction