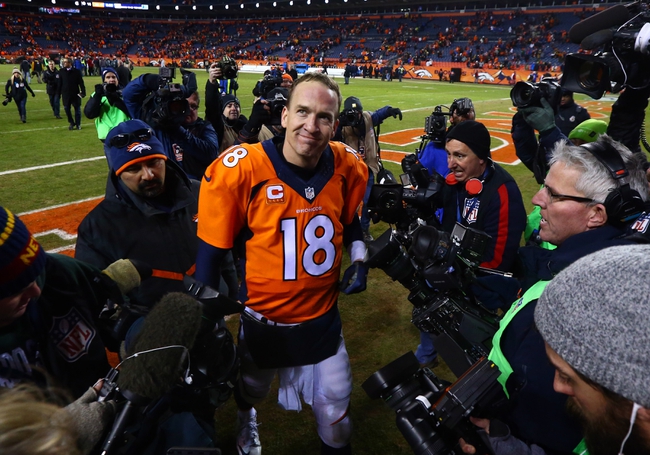 With the 2016 NFL divisional round in the books, we’re one step closer to Super Bowl 50. The four teams left in contention are the top two seeds from each conference. That hasn’t happened since 2004, so it’s actually a fairly exciting way to kick-off (pun intended) the latter half of the postseason. Without further ado, here are your top five takeaways from this weekend around the league.

For many fans, this match-up is just about as exciting as the Super Bowl itself. For the seventeenth time in their Hall of Fame careers, Tom Brady and Peyton Manning will meet on the gridiron. With Manning potentially playing the final season of his career, there may never be a Brady v. Manning XVIII, so I recommend enjoying it no matter which side you’re on. But, hey, go Broncos…

All week, the Pittsburgh Steelers’ camp had claimed they would be good to go without their star wideout, but they quickly learned you just can’t replace a playmaker like Brown. While Big Ben certainly missed having him as a target, the team’s punt return game suffered most noticeably without #84. While Brown is no circa-2005 Devin Hester, he averaged twice what Markus Wheaton did yesterday throughout the regular season.

3. The Carolina Panthers’ secondary needs to step it up.

Credit where credit’s due to cornerback Josh Norman, but one player does not a secondary make. After holding the Seattle Seahawks scoreless in the first half yesterday, Carolina’s D allowed one huge play after another post-halftime. As they gear-up to face the Arizona Cardinals’ potentially explosive offense, this should be a major focus in practice this week.

…and here we learn why the Arizona Cardinals are only potentially explosive. While Palmer managed to make some big plays on Saturday night, including that beautiful 75-yard bomb to Larry Fitzgerald, he also made one questionable decision after another. Palmer’s night ended (rather miraculously) with just two interceptions, but the Green Bay Packers aren’t the ball-hawkers the Carolina Panthers are. Palmer needs to polish it up this week if he wants to take his team all the way to Santa Clara.

5. Officiating is still a darn disaster.

After 19 weeks of football (plus the preseason), you’d think the officials might have finally figured it out. No such luck. If the NFL wants to continue to produce a viable product, they need to have their referees revisit the rulebook this offseason. Learning what, precisely, constitutes control of the ball would be a good place to start. Confusion abounded for players, coaches, and fans alike regarding some of the divisional round’s calls. We won’t even get into coin toss-gate. This can’t continue or the league is going to start to lose relevance.

The pick in this article is the opinion of the writer, not a Sports Chat Place site consensus.
Previous Pick
Seahawks at Panthers - 1/17/16 NFL Divisional Round Pick, Odds, and Prediction
Next Pick
NFL News: Player News and Updates for 1/20/16