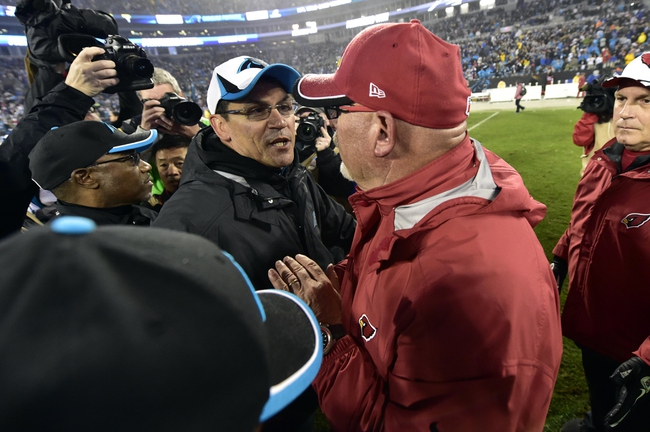 The Arizona Cardinals and Carolina Panthers meet Sunday in the NFC Championship at Bank of America Stadium.

The Arizona Cardinals hope to reach their first Super Bowl since the 2008 season. Carson Palmer is completing 61 percent of his passes for 349 yards, three touchdowns and two interceptions. Palmer has six touchdown passes in his last three games. Larry Fitzgerald and John Brown have combined for 258 receiving yards and one touchdown while Michael Floyd has three receptions. The Arizona Cardinals ground game is averaging 40 yards per contest, and David Johnson leads the way with 35 yards on 15 carries. Defensively, Arizona is allowing 20 points and 386 yards per game. Tony Jefferson leads the Cardinals with nine tackles, Dwight Freeney has one sack and Jerraud Powers has two pass deflections.

The Carolina Panthers look for their first Super Bowl appearance since the 2003 season. Cam Newton is completing 72.7 percent of his passes for 161 yards, one touchdown and zero interceptions. Newton has three touchdown passes in his last three games. Greg Olsen and Jerricho Cotchery have combined for 99 receiving yards and one touchdown while Ed Dickson has two receptions. The Carolina Panthers ground game is averaging 144 yards per contest, and Jonathan Stewart leads the way with 106 yards and two touchdowns. Defensively, Carolina is allowing 24 points and 403 yards per game. Luke Kuechly leads the Panthers with 11 tackles, Josh Norman has a sack and Robert McClain has one pass deflection. Foswhitt Whittaker is questionable and Jared Allen is doubtful.

The Cardinals have been my Super Bowl pick for more than three months, and I'm not backing out now. Arizona's offense is more explosive and the defense makes more game changing plays. I also find it tough to trust the Panthers, as they go cold at times, as we saw in the second half against the Seahawks. I really like the free field goal here, but I think the Cards win this game outright.

The pick in this article is the opinion of the writer, not a Sports Chat Place site consensus.
Previous Pick
Patriots at Broncos - 1/24/16 AFC Championship Pick, Odds, and Prediction
Next Pick
NFL News: Player News and Updates for 1/25/16