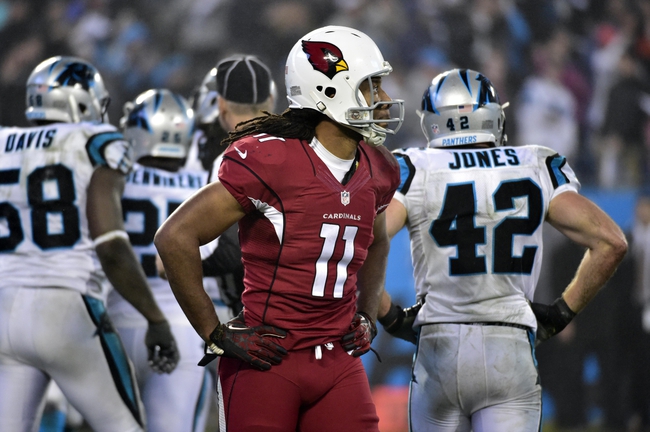 The Carolina Panthers and the Arizona Cardinals face off on Sunday in the NFL’s NFC Championship Game.

The Carolina Panthers finished the regular season at 15-1 and last week disposed of the two-time defending NFC Champion Seattle Seahawks to advance to this game. The Panthers offense averaged 31.2 points per game and 366.9 yards and they had a plus 20 turnover ratio. Carolina QB Cam Newton had a monster year completing 59.8 percent of his passes with 35 touchdowns and 10 interceptions and he rushed for 636 yards and 10 touchdowns. Jonathan Stewart led the Panthers in rushing this season despite missing several games and last week he rushed for 108 yards and two touchdowns and Greg Olsen and Jerricho Cotchery led all receivers. The Panthers defense is allowing 19.2 points and 322.9 yards per game with 24 interceptions, 44 sacks, and 22 fumble recoveries. Luke Keuchly leads the Carolina defense with 118 tackles, Thomas Davis has 105 tackles, Kawann Short has 11 sacks, and Josh Norman has emerged as one of the top cornerbacks in the NFL. Carolina hasn’t gotten much respect this season from the public or odds makers but they are two wins away from getting the credit they deserve.

The Arizona Cardinals were 13-3 this season and they arrive in Carolina after knocking off the Packers in overtime last week. The Cardinals offense averaged 30.6 points and 408.3 yards per game and they were plus nine in turnover ratio. Arizona QB Carson Palmer had a career year completing 63.7 percent of his passes with 35 touchdowns and 11 interceptions. The Cardinals ran for just 40 yards last week with David Johnson rushing for 35 of them while Larry Fitzgerald had eight receptions, John Brown had five receptions, and Michael Floyd scored two touchdowns on three catches. The Cardinals defense allowed 19.6 points and 321.7 yards per game with 19 interceptions, 36 sacks, and 22 fumble recoveries. Deone Buchanon is Arizona’s top tackler wit 112, Kevin Minter has 94 tackles, and Tony Jefferson has 78 tackles. Arizona has the depth at receiver to pose plenty of threats but they will need to run the ball and create turnovers on defense to have a chance to win this one.

While these teams hit and play physical these are also the top two offenses in football and I see this one going over the total and that is my free pick.

The pick in this article is the opinion of the writer, not a Sports Chat Place site consensus.
Previous Pick
Patriots at Broncos - 1/24/16 AFC Championship Pick, Odds, and Prediction
Next Pick
NFL News: Player News and Updates for 1/25/16