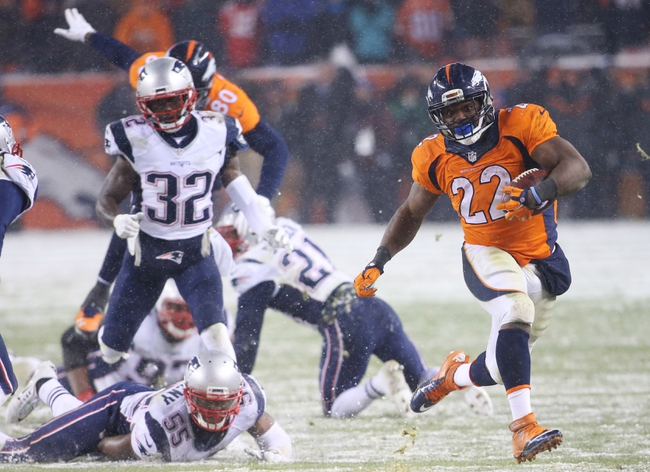 The Denver Broncos and the New England Patriots face off on Sunday in the AFC Championship game in NFL action.

The Denver Broncos are 13-4 this season after beating the Steelers last week to land in this game. The Broncos won the AFC West averaging 22.2 points per game and 355.5 yards but are the only team in the playoffs with a negative turnover ratio at minus four. Peyton Manning was unspectacular last week completing 56.8 percent of his passes with no touchdowns and an interception. C.J. Anderson looked to have the fresher legs in backfield last week rushing for 72 yards and a touchdown and Emmanuel Sanders had five catches and Damaryius Thomas has four catches. Denver’s defense allowed 18.5 points and 283.1 yards this season with 14 interceptions, 52 sacks, and 22 fumble recoveries. Danny Trevathan was the Broncos leading tackler with 109, Brandon Marshall had 102, Von Miller had 11.5 sacks, and DeMarcus Ware had 7.5 sacks. Denver didn’t make it look pretty last week but in the end they did what they needed to do to get the win and advance.

The New England Patriots are looking to avenge their controversial regular season loss at Denver and to go to the Super Bowl for the second year in a row. The Patriots offense averaged 29.1 points this season and 374.4 yards per game and had a plus seven turnover ratio and they are coming off of a dominating win over the Chiefs last week in a game they scored a touchdown on their opening drive and never looked back. Pats QB Tom Brady had a monster year completing 64.4 percent of his passes with36 touchdowns and seven interceptions. The Patriots ran for 38 yards last week led by Steven Jackson and Julian Edelman had 10 receptions and Rob Gronkowski had seven catches and two touchdowns. The Patriots defense allowed 19.7 points and 339.4 yards per game with 12 interceptions, 49 sacks, and 22 fumble recoveries. Logan Ryan and Patrick Chung each had nine tackles last week and Rob Ninkovich, Jamie Collins, and Don’t’a Hightower each had six. Chandler Jones had a monster year with 12.5 sacks and Jabaal Sheard had 8.0 sacks.

Neither of these defenses are giving up much and I expect that to be the case here as well so my free pick is going to be on the under.

The pick in this article is the opinion of the writer, not a Sports Chat Place site consensus.
Previous Pick
NFL News: Player News and Updates for 1/23/16
Next Pick
Cardinals at Panthers - 1/24/16 NFC Championship Pick, Odds, and Prediction