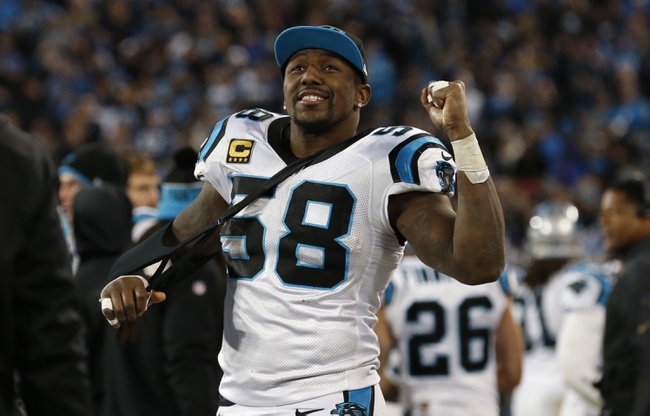 A Look at the Injuries That Could Affect the Super Bowl

When your team is one of the two remaining contenders in the NFL, especially during a year as huge as this, missing the game really isn’t an option (unless your name happens to be Kelvin Benjamin). This morning, we’re going to look at the top five injuries that could impact the outcome of Super Bowl 50. If you’re a fan of one of these teams, just be grateful we aren’t dealing with Terrell Owens and his ankle issues in Super Bowl XXXIX.

1. Carolina Panthers LB Thomas Davis sustained an isolated ulna fracture, which essentially means that his arm was “karate chopped.” In many cases, this kind of break also impacts (quite literally) the radius bone, which Davis mercifully escaped. There would be no chance for him to take the field in two weeks if both bones were fractured. As it stands, though, Davis has said, “I guarantee you I will not miss the Super Bowl.” I’m inclined to believe him. The man has, after all, already beaten three torn ACLs.

2. Denver Broncos S TJ Ward, who dealt with an ankle issue during the regular season, appeared to reinjure the same ankle during Sunday’s game. It doesn’t appear to be serious, however, and word from the Broncos’ camp is that he’ll be good to go come Super Bowl Sunday.

3. Carolina Panthers DE Jared Allen missed the NFC Championship with a broken foot. If there’s absolutely any shot the 12-year NFL veteran playing in his only Super Bowl appearance thus far, I don’t think he’ll miss it. I look for Ron Rivera and the training staff to do whatever they can to get Allen on the field at Levi’s Stadium on February 7.

4. Denver Broncos S Darian Stewart exited Sunday’s AFC Championship with a knee injury that, thankfully for fans everywhere, turned out to be nothing more than a mild MCL sprain. Since no ligaments are torn, Stewart should be able to tough it out and play in the Super Bowl. I look for him to be limited in practices from here on in, though.

5. Denver Broncos CB Chris Harris Jr. is suffering from a bruised shoulder that saw him have limited action last Sunday. The team will need him in fighting form if they want to beat the Carolina Panthers, so I expect Harris will be doing everything in his power to recover in the next 11 days.