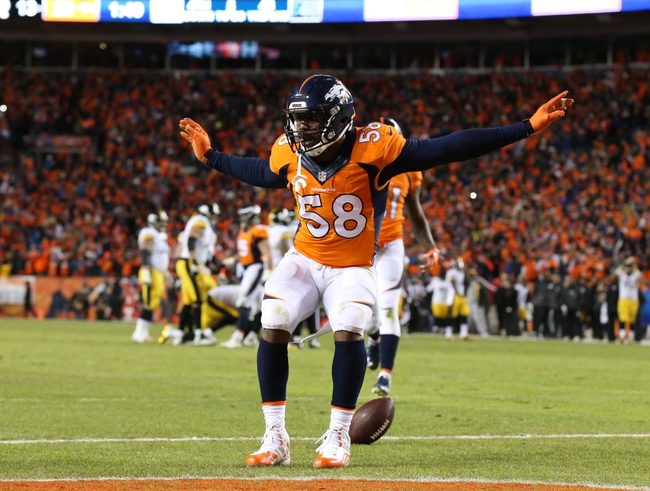 Now that Super Bowl 50 is officially in the books, it’s time to start looking ahead to the 2016 regular season (210 days until kickoff if anyone’s counting). This morning, we’re going to run through the top ten unrestricted free agents who could hit the market this offseason. Some of these guys aren’t likely to come within ten miles of the chopping block, but who really knows what offseason drama awaits?

1. Denver Broncos LB Von Miller carried his team’s defense through the AFC Championship and the Super Bowl. There’s no way John Elway and his front office are going to let the Super Bowl 50 MVP walk this year. Look for Miller to sign an extension sooner rather than later.

2. Carolina Panthers CB Josh Norman lucked out and had a breakout season during a contract year. Norman, in many fans’ minds, was the best player at his position in 2015. There’s been some talk that the Panthers will let him walk to avoid a salary cap hit, but I absolutely don’t see it happening. Panthers fans should expect to see Norman in blue and black for the long term.

3. Chicago Bears WR Alshon Jeffery has been plagued by injuries for the past few seasons, but he still remains fourth ranked in receiving yards-per-game. The franchise tag has been discussed in regard to Jeffery, but paying a player who isn’t likely to top 1,000 yards over $10 million seems excessive, even by the Bears’ standards; these are the people who made Jay Cutler the highest paid quarterback in the league, remember. I think Jeffery walks and possibly winds-up at the Minnesota Vikings.

4. New York Jets DE Muhammad Wilkerson finished the 2015 season with 12.0 sacks and 64 tackles, making him the best player on the Jets defensive line. If Todd Bowles and Co. are serious about going to the postseason, they can’t afford to let Wilkerson walk. So far, though, contract negotiations have gotten nowhere. Right now, the franchise tag seems like the most likely option in this one.

5. Kansas City Chiefs S Eric Berry has emerged from his battle with lymphoma as strong as ever on the football field. In addition to the fact that he’s a solid safety who knows the Chiefs’ playbook inside and out, Berry is a fan favorite. He’s expected to re-sign with his current club, but if Berry somehow hits the market, look for the New York Giants to make a play for him. They have $60 million to play with this year.

6. Speaking of, New York Giants DE Jason Pierre-Paul may be down a finger, but he can still play ball with the best of them. That said, JPP underwent another surgery on Monday and there’s been no word yet on the outcome of the procedure or his timetable for recovery. At this point, the odds that the Giants slap JPP with the franchise tag are slim to none, so they’ll either negotiate a new contract or the nine-fingered player will enter a free agency market that won’t be easy for him to navigate.

7. Washington Redskins QB Kirk Cousins, who finally earned the starting job after much drama in DC this season and last, isn’t likely to be cut by the team. To be perfectly honest, Cousins isn’t worth nearly as much to any other club as he is to the Redskins. Plus, Cousins was playing extremely good football in the latter half of 2015. I look for him to continue as the starter in the 2016 season.

8. Philadelphia Eagles QB Sam Bradford didn’t exactly have a great year, but there were flashes of potential (as per usual with poor Bradford). The rumor mill is running rampant with the notion that the Eagles are looking to bring back Nick Foles, so I expect Bradford will be let go at some point unless he’s kept as a back-up. Bradford should, though, have plenty of options as long as he can stay healthy throughout the offseason.

9. Denver Broncos QB Brock Osweiler showed promise when he stepped-in for an injured Peyton Manning this year. With Manning’s probably retirement looming, I can’t see the Broncos front office letting Osweiler walk away just to go immediately back to the drawing board. This contract, however, won’t be an easy one to negotiate. Let the games begin.

10. Indianapolis Colts TE Dwayne Allen is almost certain to hit the free agency market this offseason. The Colts simply can’t afford to keep him, Coby Fleener, and Jack Doyle, all while designing a “shocking” new contract for Andrew Luck. When (if?) Allen is cut, the New York Giants (you’re floored, I know) are a possible landing spot for the talented, if injury prone, young man.

The pick in this article is the opinion of the writer, not a Sports Chat Place site consensus.
Previous Pick
Top Ten Losers of the 2015 NFL Season
Next Pick
Top Five NFL Coaching Moves of 2016