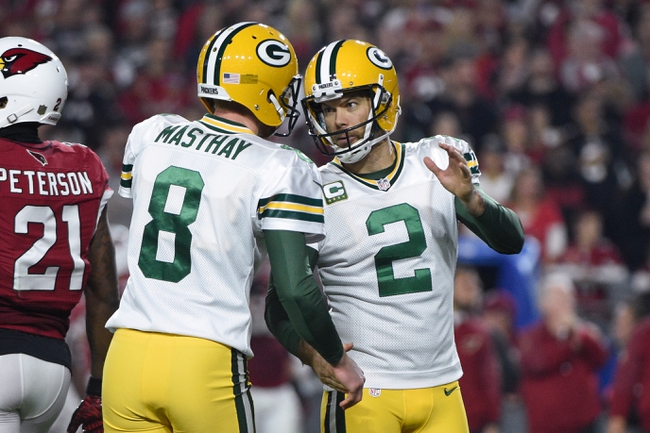 Free agency in the NFL begins in just a couple of weeks, but we’ll hear plenty about negotiations and potential destinations in the meantime. That said, let’s check out our daily wrap-up of the league and see what’s going on today.

Here’s an interesting situation up in Green Bay. The Packers didn’t use the franchise tag on kicker Mason Crosby, who was an impending free agent. Instead, they locked him up for the immediate future.
The two sides ended up agreeing on a new contract, one worth $16 million over four years. Crosby has been with the team since 2007 and has been pretty darn good. Over the last three years, he’s got an 85.7 percent FGM rate and didn’t miss any extra points in 2015.

The Ravens’ Steve Smith seems like he’ll be back and ready for Week 1 of this upcoming season. He’s getting over an Achilles injury.
Smith is soon to be 37, but is still pretty effective on the field. In seven games during 2015, he logged 46 catches with 670 yards and three touchdowns.

In Panthers news, WR Kelvin Benjamin is expected to be back to 100 percent ahead of the team’s training camp this off-season.
Benjamin is getting over an ACL tear, and if he can remain healthy he should post some great numbers alongside Cam Newton in 2016.

In our requisite Peyton Manning news, sources close to the team are not expecting him to make his official decision about retirement this week.
Over the past weekend, a report came out that said Manning was definitely going to retire, but that’s at least a bit of a question mark now. The Broncos need a decision by March 9, which is when Manning’s contract becomes fully guaranteed and they’ve still got time to secure Brock Osweiler before he hits the open market. It may come down to the wire, but we still expect Manning to call it quits when he’s on top.

We haven’t yet examined Tom Brady’s new contract extension just yet, so let’s check that out.
Brady inked a two-year extension through 2019 this week with the Patriots, which keeps him under contract through his age-42 season. This deal is expected to lower his $15 million cap hit.
Even though he’ll be 39 in August, Brady looks as good as ever, logging 36 touchdowns with 4,770 yards and just seven interceptions.

The pick in this article is the opinion of the writer, not a Sports Chat Place site consensus.
Previous Pick
NFL News: Player News and Updates for 3/1/16
Next Pick
Top Five NFL Players Who Were Franchise Tagged in 2016