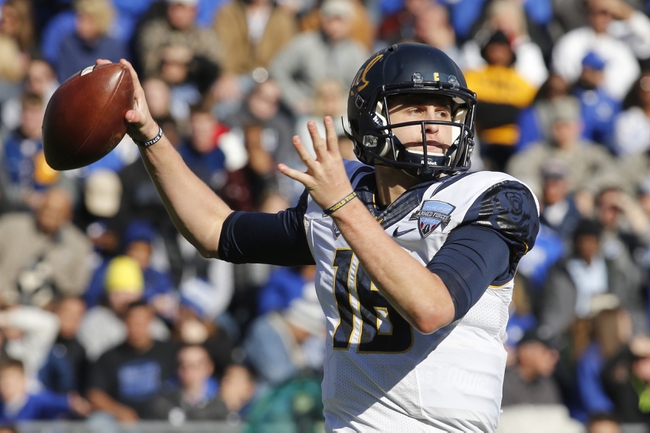 The quarterback class for the 2016 NFL draft isn’t exactly mind blowing, as there are maybe one or two guys who have NFL starter written on them right now. But there are some guys in the later rounds who have raw talent and could blossom into something later down the road. A bunch of question marks at the position this year.

Let’s take a look at the top-10 quarterback prospects for the 2016 NFL draft.

1. Jared Goff, Cal - Jared Goff is the top quarterback in this class, and it’s really not even close. Goff has impressive accuracy, a high football IQ and throws the ball with terrific touch that usually falls right in the receiver's hands. Goff looks like an NFL quarterback and could see some playing time as early as his rookie season. Yes, Goff needs to put on weight and isn’t super athletic, but the kid can flat out throw the ball and could be a Pro Bowl quarterback at some point. I love Goff and think he’s a top-five pick easily.

2. Carson Wentz, North Dakota State - Carson Wentz has the size of an NFL quarterback at 6’5”, 240 pounds. Wentz also has good arm strength, above-average velocity and moves around well in the pocket. Wentz also makes good decisions with the ball and has shown the ability to make throws on the run. My concern with Wentz is the lack of competition in college and his bad habit of locking onto receivers at times. Still, Wentz is the other quarterback in this class who could see playing time rather quickly after being selected.

3. Paxton Lynch, Memphis - Paxton Lynch has an impressive build at 6’7”, 244 pounds and is very athletic. Lynch is comfortable on the move and delivers an accurate throw when rolling out of the pocket. Lynch makes quick decisions with the ball and has an above-average football IQ. Lynch doesn’t have the best touch in the world, but that didn’t stop him from leading Memphis to its only double-digit winning season. Lynch has potential as an NFL starter after spending a year or two on the bench.

4. Connor Cook, Michigan State - It seems like everyone loved Connor Cook in college and thought he had what it takes to be an NFL quarterback. Cook has potential, but I see him nothing more than a game manager at best. Cook handles the underneath throws well and does a good job of scanning the field and taking what the defense gives him. Ask Cook to takeover a game and pick up chunk yardage, and he forces passes and can really struggle. Right now, Cook is a Mark Sanchez-type quarterback. Somebody who won’t lose you many games when you keep the workload to a minimum, but somebody who isn’t going to be a difference maker either.

5. Christian Hackenberg, Penn State - I was driving the Christian Hackenberg bandwagon for two years until his junior season came around and he showed no progress. Sure, the worst offensive line in college football didn’t help, but Hackenberg showed no awareness in the pocket and seemed to have low self esteem issues at times. Hackenberg gives off these bad vibes way too often. However, Hackenberg does have a great arm, decent athleticism, the size and is a tough kid who can take hits over and over. Hackenberg may be the sleeping giant in this group of quarterbacks.

6. Cardale Jones, Ohio State - You’d be hard pressed to find a quarterback as big and athletic as Cardale Jones. Jones is built like a Ben Roethlisberger but has a little more athleticism and running ability. Jones also has an impressive mental game to where he doesn’t get rattled often and plays with a certain type of confidence. The concerns with Jones is that he doesn’t have a large resume under his belt, really struggled with a larger workload and made downright awful decisions at times. Carale is very ,very raw for the quarterback position, but he has shown bright spots to where he could be a steal in the second round or middle of the draft.

7. Brandon Doughty, Western Kentucky - Brandon Doughty was the most accomplished quarterback in college football the last couple of seasons. Doughty is a confident passer who stands tall in the pocket at 6’3” and does a nice job of keeping his eyes downfield. Doughty reads defenses well and is very tough to get after, as he was sacked just 54 times in 1,491 pass attempts. Doughty has a high football IQ and has just enough athletic ability to escape from the pocket to buy himself more time. Doughty is worth a flyer in the later rounds given him accomplishments and mental makeup.

8. Dak Prescott, Mississippi State - Dak Prescott has a very live arm and is more than capable of delivering strong and accurate throws when he finds a rhythm. The problem is that Prescott is inconsistent and doesn’t always step into his throws. Right now, Prescott is probably more of an athlete than passing quarterback, as he’s dangerous with his legs and big enough to where he can move the chains when fighting for those extra yards. Hate to say it, but Prescott may be this year’s Tim Tebow with slightly higher upside. I really enjoyed Prescott as a college player, but I’m not sure he’s polished enough as a passer to be an NFL quarterback.

9. Jacoby Brissett, NC State - Jacoby Brissett has potential written all over him as a later round selection. Brissett is built well at 6’4”, 230 pounds, is extremely athletic with above-average speed and has shown flashes of being able to make strong throws. Brissett rarely makes poor decisions with the ball, has impressive touch and was a leader on and off the field for the Wolfpack. Sure, Brissett is still very raw as a passer, but the skill set is there. Brissett could have a career similar to Tyrod Taylor if given the chance and put in the right system.

10. Jeff Driskel, Louisiana Tech - Jeff Driskel was downright awful at Florida, but he did a fabulous job of turning things around in Lousiana Tech. Driskel thrived in a shotgun offense and showed the ability to zip in strong, accurate throws. Driskel threw the deep ball well and has a nice over the top release. Driskel was also the fastest quarterback at the NFL combine with a 4.56 40-yard dash. Driskel is worth a third-round selection and could make an NFL roster if he’s able to carry over what he did with the Bulldogs.