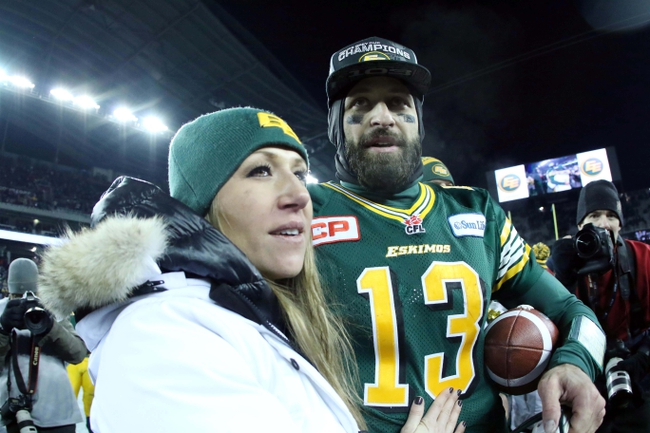 The Line -- Over/Under: Click to Get Latest Betting Odds

The Ottawa Redblacks look for another impressive season after finishing 12-6 and losing in the Grey Cup. Henry Burris returns at quarterback after completing 70.9 percent of his passes for 5,703 yards, 26 touchdowns and 13 interceptions. William Powell remains at running back after racking up 447 yards and two touchdowns. Chris Williams and Greg Ellingson combined for more than 2,200 receiving yards and 14 touchdowns while Ernest Jackson had 84 receptions and five touchdowns. Defensively, the Ottawa Redblacks finished last season with 62 sacks and 26 interceptions. Damaso Munoz led Ottawa with 74 tackles, Zack Evans had seven sacks and Abdul Kanneh had six interceptions.

The Edmonton Eskimos finished last season with a 14-4 record and won their 14th Grey Cup. Mike Reilly returns at quarterback after completing 65 percent of his passes for 2,449 yards, 15 touchdowns and 10 interceptions. Shakir Bell remains at running back after racking up 633 yards on 113 carries. Adarius Bowman and Derel Walker combined for more than 2,400 receiving yards and 13 touchdowns while Chris Getzlaf had 33 receptions and four touchdowns. Defensively, the Edmonton Eskimos finished last season with 49 sacks and 23 interceptions. J.C. Sherritt led Edmonton with 71 tackles, Odell Willis had nine sacks and John Ojo had five interceptions.

The Eskimos are 5-0 against the Redblacks, which includes a victory in last year's Grey Cup. While I'm sure the Redblacks have motivation to kind of stick it to Edmonton, the fact is the Eskimos are as balanced a team in the CFL and are very tough to beat at home. I expect another close and tough played game, but Edmonton should come out on the winning end once again.