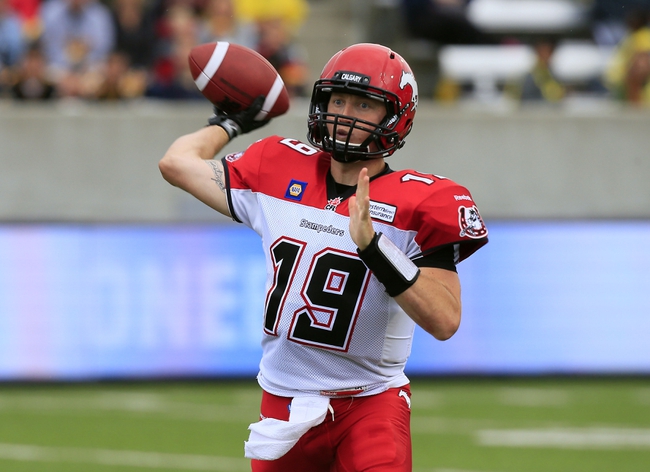 The Winnipeg Blue Bombers look to bounce back after losing their season opener to the Montreal Alouettes. Drew Willy is completing 73.5 percent of his passes for 303 yards, one touchdown and one interception. Willy has four touchdown passes in his last three games. Darvin Adams and Jace Davis have combined for 187 receiving yards and one touchdown while Andrew Harris has seven receptions. The Winnipeg Blue Bombers ground game is averaging 108 yards per contest, and Harris leads the way with 80 yards on 13 carries. Defensively, Winnipeg is allowing 22 points and 446 yards per game. Ian Wild leads the Blue Bombers with eight tackles, Chris Randle has one interception and Kevin Fogg has one pass deflection.

The Calgary Stampeders look for a bounce back game after losing their opener to the BC Lions. Bo Levi Mitchell is completing 59.3 percent of his passes for 233 yards, one touchdown and zero interceptions. Mitchell has four touchdown passes in his last three games. Kamar Jorden and Lemar Durant have combined for 129 receiving yards and one touchdown while Anthony Parker has two receptions. The Calgary Stampeders ground game is averaging 50 yards per contest, and Tory Harrison leads the way with 19 yards on five carries. Defensively, Calgary is allowing 20 points and 334 yards per game. Tommie Campbell leads the Stampeders with six tackles, Micah Johnson has one sack and Ciante Evans has one pass deflection.

The Stampeders are a far better team than what they showed last week and they should be able to show that at home. Also, it seems like Willy is still trying to find his footing after missing so much playing time last season. It may take a while before he gets back to form. Give me the home team by double digits.