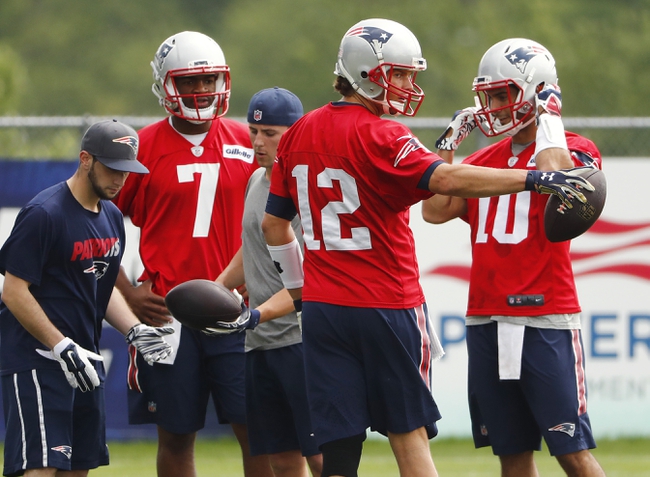 The New England Patriots have made the playoffs seven straight seasons and are the overwhelming favorites to once again win the AFC East. Even with Tom Brady suspended the first few games, the Pats seem to be in good shape.

Key Player Losses: The Patriots traded defensive end Chandler Jones to the Arizona Cardinals for offensive guard Jonathan Cooper and a draft pick. Jones led the Pats last season with 12.5 sacks. Wide receiver Brandon LaFell was cut and singed with the Cincinnati Bengals and tight end Scott Chandler was also cut due to an injury that may have ended his career. Linebacker Jerod Mayo, who had 535 tackles with New England, announced he will retire at 30 years old. The Pats also gave up on defensive tackle Dominique Easley.

Key Player Additions: Tight end, Martellus Bennett, who has caught at least 53 passes in four straight seasons and has 23 touchdown receptions for his career. The Pats got defensive line help with the addition of Chris Long, who had 54.5 sacks in eight seasons with the St. Louis Rams. The addition of Nate Washington should also help New England’s wide receiver corps, as he still contributes fairly well for a 32-year-old.

Draft: Cyrus Jones is a physical corner out of Alabama who should see playing time his rookie season and could bolster an already impressive defense. New England had issues on the offensive line, so Joe Thuney could be thrown in the mix early and often if those struggles continue. Quarterback Jacoby Brissett won’t see the field anytime soon, but I do like his upside. Malcolm Mitchell could also be a steal, as the speedy wide receiver was underused at Georgia and has big time potential.

2016 Outlook: Even with Brady suspended for the first four games, they’re still the team to beat in the AFC East and just need to get into the playoffs to have a shot. As long as Brady and Bill Belichick are on this team, they have a chance to win a championship. Nothing changes here. It’s really that simple when it comes to the Patriots, arguably the more consistent franchise in all of sports over the last decade.