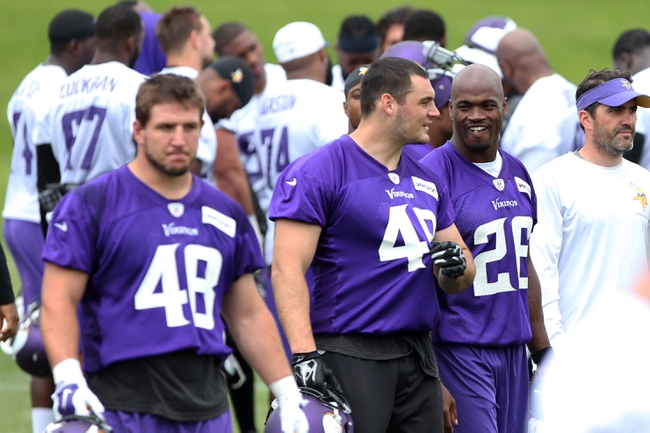 The Minnesota Vikings exploded to a 11-5 record last season and hope to make the playoffs back-to-back seasons for the first time since 2008-09. The Vikings have an impressive young core to be excited about and are quietly becoming that trendy team in the NFC that some think can make some serious noise once again.

Can the Vikings prove last season wasn’t a fluke?

Key Player Losses: The Vikings lose wide receiver Mike Wallace after the one-year experiment didn’t work, as the speedy WR finished with just 39 receptions and two touchdowns. Defensively, the Vikings have to replace young safety Robert Blanton, who had 147 tackles and six pass deflections in four seasons with the franchise. The Vikings clearly did a great job of keeping last years playoff team intact.

Key Player Additions: The Vikings did a great job of bolstering their offensive line with the additions of Andre Smith and Alex Boone, a duo that has a combined 132 starts in the NFL. defensively, the Vikings added a Pro Bowl safety in Michael Griffin, who has 25 career interceptions and 12 forced fumbles. Emmanuel Lamur is also a nice pickup at linebacker, and he has his best days ahead of him at just 27 years old.

Draft: The Vikings hit a homerun with their first two picks in wide receiver Laquon Treadwell and cornerback Mackensie Alexander. Treadwell is a speedy WR who will stretch the field and has great hands, while Alexander is a physical and gifted corner who has shutdown potential at the pro level. Willie Beavers is a massive offensive guard who has the ability to play tackle and Kentrell Brothers was one of the top linebackers in the SEC, and he gives the Vikings great value in the fifth round. Still, the Vikings first two picks make this draft a success in my eyes, as I think both guys are going to be highly successful at their positions.

Outlook: There’s no reason to think the Vikings can’t repeat last years efforts, as pretty much the entire team returns and they got even better on defense. Also, Teddy Bridgewater improved his first two years in the league and has shown enough to think his third season will be his best yet. The Vikings have one of the better defenses in the NFL, a young quarterback making strides and enough playmakers around him. What's not to like about Minnesota this season? I see the Vikings winning double-digit games and being a team nobody wants to see in the playoffs. I’m really high on the Minnesota Vikings.