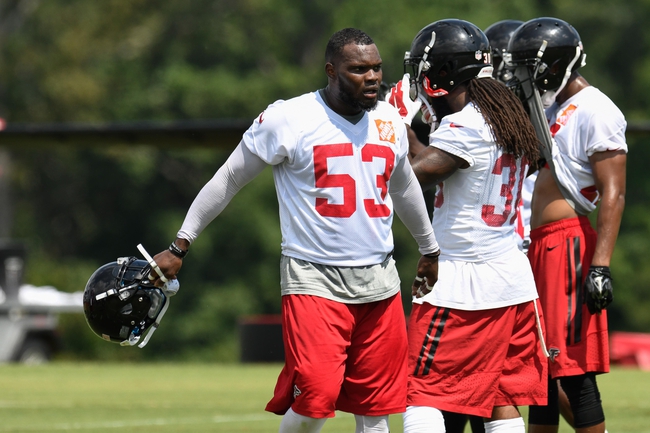 The Atlanta Falcons have missed the playoffs for three straight seasons and enter year two under coach Dan Quinn. Despite not having as much talent as some of the other teams, the NFC South has been a revolving door over the years, so Falcons’ fans have to be somewhat optimistic of the upcoming season.

Can the Falcons get back to the postseason?

Key Player Additions: The Falcons helped their offense by adding offensive lineman Alex Mack and wide receiver Mohamed Sanu. Mack has 101 career starts at center and Sanu is a young, speedy receiver who will take big time pressure off of Julio Jones. Defensively, Courtney Upshaw is a good pickup at the linebacker position while Derrick Shelby provides depth on the defensive line and likely has his best years ahead of him at just 27 years old.

Draft: Safety Keanu Neal adds some serious toughness to the Falcons defense, as he’s a guy who does the dirty work and is more than willing to lay the wood. Linebacker Deion Jones is another tough guy from the SEC and covers a lot of ground with his athleticism. Austin Hooper is yet another tight end drafted out of Stanford and De'Vandre Campbell is a linebacker who can play inside or outside. The Falcons addressed areas of need and have a couple of guys who can contribute right away.

Outlook: The Falcons started the season with five straight wins and then fell off like Big Mac toppings. So, this team knows it’s capable of winning games, and there’s a clear culture change with Quinn running the show. It’s always tough to rule out any team in the confusing NFC South and you can make a case that the Falcons are more polished of a team than the Saints and Buccaneers. I’m not extremely high on the Falcons this season, but I wouldn’t be shocked if they were able to sneak into a wild card spot. After all, Atlanta went 8-8 last season despite losing seven of its last nine games.