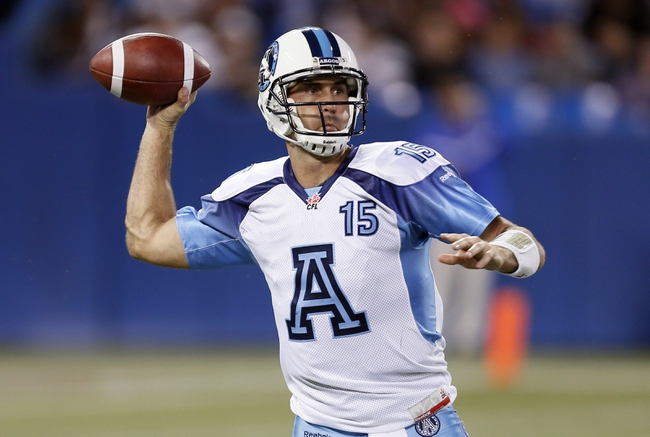 The Line Argonauts -6 -- Over/Under: 44.5 Click to Get Latest Betting Odds

The Montreal Alouettes could use a win here after not winning a game since week 1. Kevin Glenn is completing 67.5 percent of his passes for 591 yards, two touchdowns and two interceptions. Glenn has five touchdown passes in his last three games. Nik Lewis and Duron Carter have combined for more than 300 receiving yards and one touchdown while B.J. Cunningham has seven receptions. The Montreal Alouettes ground game is averaging 80 yards per contest, and Tyrell Sutton leads the way with 105 yards on 23 carries. Defensively, Montreal is allowing 24.3 points and 417 yards per game. Bear Woods leads the Alouettes with 18 tackles, John Bowman has three sacks and Chip Cox has on interception.

The Toronto Argonauts could use a win here in order to get a game above a .500 record. Ricky Ray is completing 70.5 percent of his passes for 1,000 yards, six touchdowns and one interception. Ray has four touchdown passes in his last three games. Vidal Hazelton and Kenny Shaw have combined for more than 400 receiving yards and three touchdowns while Tori Gurley has 11 receptions. The Toronto Argonauts ground game is averaging 52.5 yards per contest, and Brandon Whitaker leads the way with 157 yards on 32 carries. Defensively, Toronto is allowing 25.8 points and 411.8 yards per game. Keon Raymond leads the Argonauts with 23 tackles, Ken Bishop has two sacks and TJ Heath has one interception.

Montreal has beaten Toronto in four of the last six meetings, and it's not like the Argonauts have been that impressive out of the gate this season. I like the value of the Alouettes and the points here, especially with many of the recent matchups between these clubs coming down to the wire.