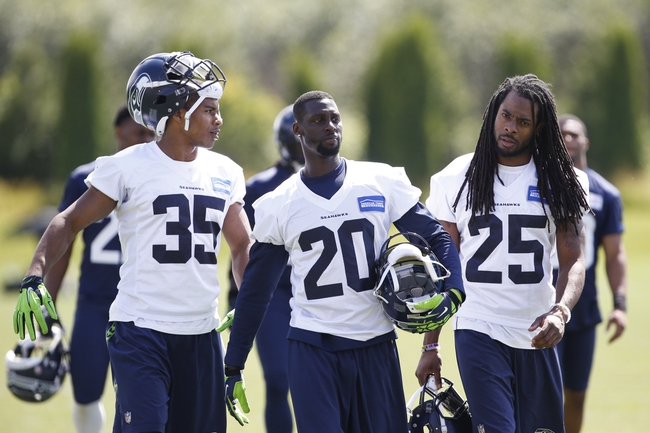 The Seattle Seahawks have been one of the more consistent teams in the NFL the last few years with Super Bowl trips in two of the last three seasons. The Seahawks are one of the Super Bowl favorites once again but do have some questions to answer before we can get that far in the process.

Can the Seahawks continue this incredible run of success?

Key Player Losses: Offensively, the Seahawks lost running back Marshawn Lynch and offensive lineman J.R. Sweezy and Russell Okung. Offensive linemen are never easy to replace, but watching Lynch retire was the biggest blow simply because he was the heart and soul of the offense and had 28 rushing touchdowns the last three years. Defensively, the Seahawks lost linebacker Bruce Irvin, who had 22 sacks and four forced fumbles.

Key Player Additions: The Seahawks bolstered their offensive line by adding tackle J'Marcus Webb, who has 61 starts under his belt at 27 years old. Defensively, Chris Clemons returns to Seattle after a short stint with the Jacksonville Jaguars. Clemons is up there in age now, but he does still have 69 career sacks and 18 forced fumbles. Cornerback Brandon Browner also returns to Seattle, a 31-year-old with 12 career interceptions.

Draft: The Seahawks added to their offensive line depth by drafting the massive offensive tackle Germain Ifedi out of Texas A&M. Ifedi is a versatile lineman who is very polished in pass protection. Defensive tackle Jarran Reed was a potential first round pick the Seahawks got in the second round and running back C.J. Prosise is a playmaker if he’s ever able to stay healthy. Also, I really like the selection of running back Alex Smith, as he has a little bit of Lynch to his game given the way he keeps going after initial contact.

Outlook: The Seahawks lost some key pieces but still have a loaded defense, the best home crowd in the NFL and the best playmaking quarterback in Russell Wilson. There’s more than enough in place for the Seahawks to make the playoffs yet again and be considered a legit Super Bowl threat. It’s going to be interesting to see the impact of losing Lynch has on the offense, but this league has shown in the past above-average QB play and a great defense can take you a long way. The Seahawks should win double-digit games for the fifth straight season.