Top Five Moments From the 2016 NFL Hall of Fame Weekend 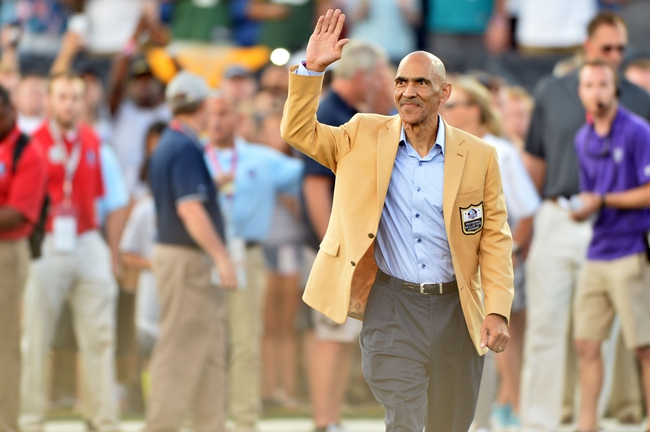 As of yesterday, we’d gone 182 days without football. Now we’re going to have to go a few more. Cue tragic soundtrack. After last night’s debacle with the Hall of Fame game (this Colts fan sure is glad she didn’t drive to Canton), the entire enshrinement weekend has taken on a bit of a pall. While I stand by the league’s decision (nobody wants injuries before the season even starts), I think this is a great time to look at the top five moments from the past few days to remind ourselves that this is about more than just the return of football. It’s about honoring players and coaches who make the game we all love possible.

Mortensen, who is battling throat cancer, still managed to take the stage on Saturday night to accept the Dick McCann award, given by the Professional Football Writers of America. His emotional appearance was enough to touch anyone, reminding us all that this isn’t just a ball game. Football really is family.

Harrison, who is normally a man of (extremely) few words, strung together more sentences than I think I’ve ever heard him say at one time (and I’ve seen a lot of interviews with the man) when he was officially inducted into the NFL Hall of Fame. #88 even quipped, “I’ve broken a lot of records, but the record for shortest Hall of Fame speech isn’t going to be one of them.”

Packers great Brett Favre, who infamously spent a few forgettable seasons playing for the Vikings and the Jets, joked about making yet another return to the playing field, prompting a hilarious reaction from current Packers QB Aaron Rodgers. Rodgers’s facial expression has already gone viral, so if you’re having a rough Monday at the office, take a gander.

4. Tony Dungy and Marvin Harrison: Together

It’s not often that a player and his coach get to be enshrined in the Hall of Fame in the same class, but it happened this year. Dungy and Harrison, who won Super Bowl XLI in Indianapolis, were both given their gold jackets this weekend. Even if you’re a Patriots fan, that has to give you at least a few goosebumps if you truly love this sport.

Pace, just the 15th No. 1 overall pick to become a Hall of Famer, gave an emotional speech to a (practically) hometown crowd. Pace hails from Sandusky, OH, so making it into the Hall was especially meaningful to him and his family, but also to St. Louis Rams fans, whose team moved back to Los Angeles this year. Pace’s induction, in many ways, was the perfect way to cap-off the Rams’ 20-year stint in the Show Me State.

The pick in this article is the opinion of the writer, not a Sports Chat Place site consensus.
Previous Pick
Colts vs. Packers - 8/7/16 Hall of Fame NFL Pick, Odds, and Prediction
Next Pick
Top Ten NFL General Managers of 2016