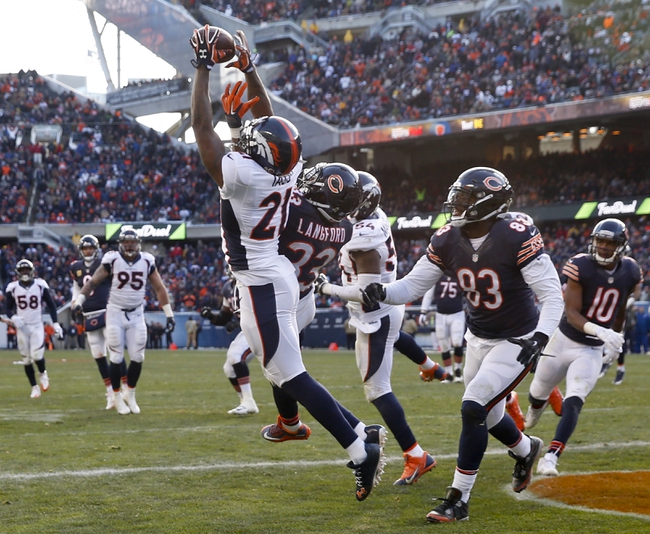 The defending Super Bowl Champion Denver Broncos travel to Soldier Field to take on the Chicago Bears as both teams kick off their respective preseason schedules.

The Denver Broncos finally reached the summit last season, finishing with a 12-4 record, and defeating the Carolina Panthers 24-10 to take home the Vince Lombardi trophy for the third time in franchise history. The main concern for Broncos fans this season will be who takes over under center in the mile high city this season, as Denver not only lost their 2015 starter in Peyton Manning, the Broncos also lost backup Brock Osweiler to the Texans in free agency. Denver traded up in the draft to get Memphis pivot Paxton Lynch at number 26 overall, who many thought was going to be the quarterback going forward for the Broncos. However in a surprising twist, the Broncos also acquired former Jets and Eagles quarterback Mark Sanchez fron Philadelphia for a conditional draft pick so it will be fun to watch how the battle for the starting spot progresses over the preseason. On the defensive side, Denver was finally able to come to terms with super bowl 50 MVP Von Miller, meaning that the majority of the defense that was key in Denver’s route to the championship would be returning for the 2016 season.

The Chicago Bears look to improve on a disappointing 6-10 season that saw the bears move into the basement of the NFC North. Jay Cutler returns for his eighth season as the Bears starting quarterback, coming off arguably one of the best seasons of his career. Even though the results may not show up in the standings, Cutler made the best of a bad situation with a depleted receiving core due to injury, he still had a career best 92.4 passer rating for the season and cut down his interception total from 18 to 11. With mainstays like Alshon Jeffery returning along with Kevin White looking to prove himself as a valuable commodity to the Bears, it will be interesting to see if Cutler can keep this pace up. On defense, not much will change personnel wise, as the Bears will look to improve a defense that finished middle of the pack in most statistical categories as Chicago will not only try to improve their statistics, but more importantly, their win total.

I’m not expecting a ton from the Broncos this season as a whole, as I think losing two starting quarterbacks is had but it’s even harder when you replace them with a rookie and a quarterback who is most known for fumbling a ball off of a lineman’s butt. However, the battle for the top QB spot will make everyone work just a little bit harder. Not to say that Chicago won’t compete, it’s just that most of the battles for the Bears will be for the second string spots.

I’ll take the Broncos on the road.

The pick in this article is the opinion of the writer, not a Sports Chat Place site consensus.
Previous Pick
Ravens vs. Panthers - 8/11/16 NFL Pick, Odds, and Prediction
Next Pick
Montreal Alouettes vs. Edmonton Eskimos CFL Pick, Odds, Prediction - 8/11/16