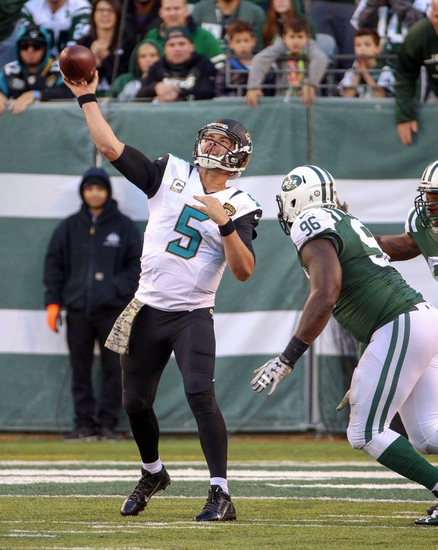 The Jacksonville Jaguars travel to the Meadowlands as they take on the New York Jets in their respective preseason debuts on Thursday.

The Jaguars showed signs of improvement last year, however they still finished at 5-11, losing their last 3 games of the season and missing the playoffs for the eighth consecutive season. The Jags used their fifth overall selection in the 2016 NFL draft to select Florida State cornerback Jalen Ramsey, who some scouts have compared to Seattle Pro-Bowler Richard Sherman. Ramsey is said by many to have had an impressive showing at training camp so far, impressing head coach Gus Bradley. It will be interesting to see how Ramsey impacts the Jacksonville secondary this season, which looks to improve a Jaguars defense that allowed a league worst 28 points per game last year. On the other side of the football, Blake Bortles will once again be taking the snaps for the Jags this season. Bortles showed that he is more than capable of leading an NFL offense last season, throwing for 35 touchdowns but also throwing a league leading 18 interceptions. The Jaguars also went out and spent on running back Chris Ivory who added 71,3 yards per game last season to the Jacksonville backfield, so it will be something to watch to see how the offense progresses in 2016

The New York Jets look to build on a 10-6 record and make the playoffs for the first time since 2010 after an impressive first year for Todd Bowles as head coach of the Jets. The Jets were finally able to sign quarterback Ryan Fitzpatrick to a contract extension, thus leaving backup QB Geno Smith on the outside looking in for the time being. It’s becoming fairly clear that Smith is starting to get really frustrated with the situation and will be looking to show that he is more than just a backup who ends up on the sidelines with a broken jaw over plane tickets. On the defensive side of the ball, Revis Island is currently closed for maintenance as Pro-Bowl corner Darrelle Revis underwent wrist surgery in March, and while there is no set timetable for his return, it’s possible he will miss the season opener. While the loss of Revis hurts, it does not change the fact that New York was a run-stopping machine last year, finishing 2nd in the league allowing a mere 83.4 yards per game on the ground, and will be looking to take over top spot this season.

I’m high on this Jaguars team this season, as I truly believe they have the potential to be a .500 team if they get everything figured out. While the Jets are a run-stopping juggernaut, it’s not their backups that have that reputation and after the first or second drive it’s going to be mostly if not all second and third strings on the field.

Give me the Jaguars and the points.