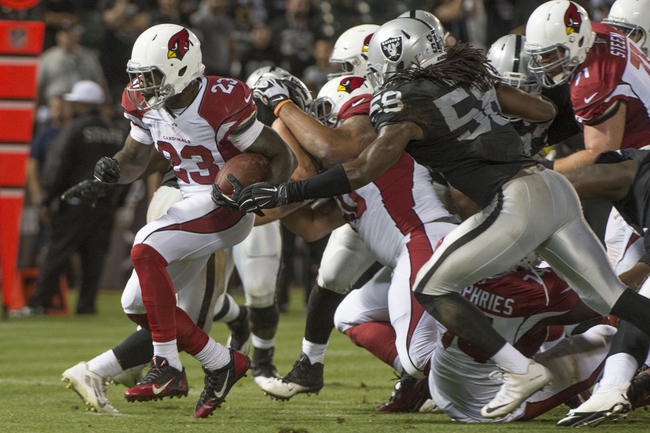 The Oakland Raiders and the Arizona Cardinals face off on Friday in a week one preseason NFL matchup.

The Oakland Raiders were an improved team last season and the expectation for this season is they take that improvement another step. The Raiders offense will be led by QB Derek Carr but with Matt McGloin the incumbent at backup all eyes will be on rookie Connor Cook to see if he can surpass McGloin on the depth chart. Latavius Murray start at RB for Oakland while Taiwan Jones is the backup and DeAndre Washington, Jalen Richard, and George Atkinson will compete for a roster spot. Amari Cooper and Michael Crabtree make up a nice WR tandem for the Raiders but after that there is a glut of players competing including six rookies who include KJ Brent and Jaydon Mickens. Defensively Khalil Mack is back to lead the Silver and Black but the Raiders were active in free agency bringing in Bruce Irvin and Malcolm Smith from Seattle as well as Reggie Nelson, Sean Smith, Dan Williams, and Nate Allen. THe Raiders roster has significantly more defensive players for this game so look for the competition to be heated.

The Arizona Cardinals are one of the favorites to make the Super Bowl this year and look for them to leave nothing on the field to make those odds cash in. Carson Palmer is locked in as the starter at QB  for the Cards but there are very capable backups with Drew Stanton and Matt Barkley as well as rookie Jake Coker from Alabama. The WR’s for Arizona are the same as last season with Larry Fitzgerald leading the way with Michael Floyd and John Brown while Jaron Brown and JJ Nelson add some depth. Chris Johnson is the top option in the Cardinals backfield with Stepfan Taylor backing him up while Arizona has a glut of tight ends including Darren Fells and Jermaine Gresham. Chandler Jones was signed in the off season and he should make an immediate impact for the Cardinals defense providing the pass rush with Calais Campbell while Robert Nkemdiche was the Arizona’s first round draft choice after he slid down the draft chart for off the field issues. Patrick Peterson and Tyrann Mathieu anchor a secondary and really for a player looking to make a team this is going to be a hard unit to crack the roster on.

While there is a ton of great defensively players in this one, I see plenty of offense as well and I like for this one to go over the total that has been set at 37.5