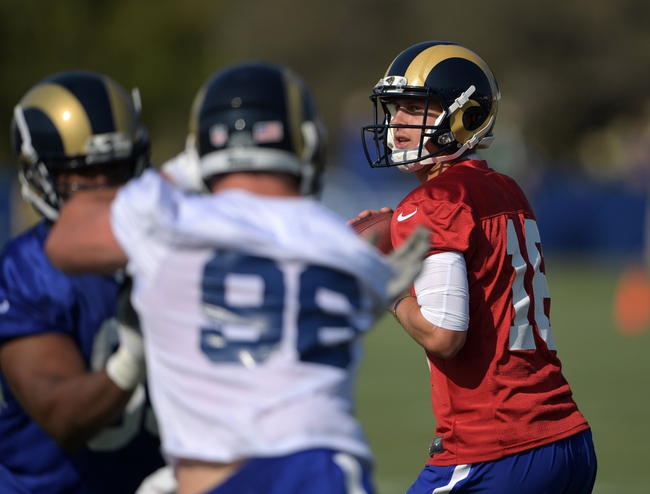 The Los Angeles Rams break ground in their new digs as they play host to the Dallas Cowboys to kick off their respective 2016 NFL Preseason schedule.

The Los Angeles Rams look for a fresh start in a familiar city for the franchise that house the navy and gold up until their move to St. Louis following the 1994 season. With new beginnings comes new hope in the first overall pick from the 2016 NFL draft in Cal quarterback Jared Goff. While it is still up in the air who will start under center week 1, between Goff and returning quarterback Case Keenum who signed a one year contract to remain with the Rams for the 2016 season. And with options such as Tavon Austin, rookie wideout Pharoh Cooper and Offensive Rookie of the Year/Pro Bowler Todd Gurley helping lead the offensive charge in Los Angeles, fans may be in store for a better homecoming than they had anticipated. LA also looks to improve on the defensive side of the ball, after ending up in the bottom 10 in yards allowed per game. But with defensive studs like Robert Quinn, Aaron Donald and Mark Barron, getting defensive pressure shouldn’t be a problem, and this could be a sleeper team to watch this year.

The Dallas Cowboys look to improve on an awful 4-12 2015 season that saw America’s team miss the playoffs after winning the division the previous year. The positive note for Dallas is that they look to have finally turned the corner, and left the injury bug in the rear view mirror. With Tony Romo healthy (for now), Dez Bryant and Jason Witten good to go and the debut of first round draft pick Ezekiel Elliott ready to be inserted into the fold, hopes are at a high for the Cowboys faithful heading into this year. There was supposed to be a battle for the backup spot behind Tony Romo, however with Kellen Moore suffering a broken ankle in practice resulting surgery and a 3-4 month recovery time, the spot is now filled by rookie QB Dak Prescott out of Mississippi State. On the other side of the ball for Dallas, there will be a lot of position battles during the preseason as quite a few names in the starting eleven are far from a lock. Rookies such as defensive linemen Charles Tapper and Maliek Collins and linebacker Jaylon Smith look to make enough of an impact to crack the week 1 starting defense. It will be interesting to see how this season will unfold and if the Blue and White have left the injuries behind them for good, or at least for this season.

We all know Tony Romo will start at QB for Dallas week 1 barring any injuries, so to be safe Dallas probably won’t give him more than one or two series and even though it’s a preseason game, I wouldn’t trust Dak Prescott to lead an NFL team as far as I can throw him. The Rams are in a new stadium, and I’m going to drink the QB battle kool-aid and hope that it brings the best out of both guys, sparking the offense for a couple scores.

Give me the rams.