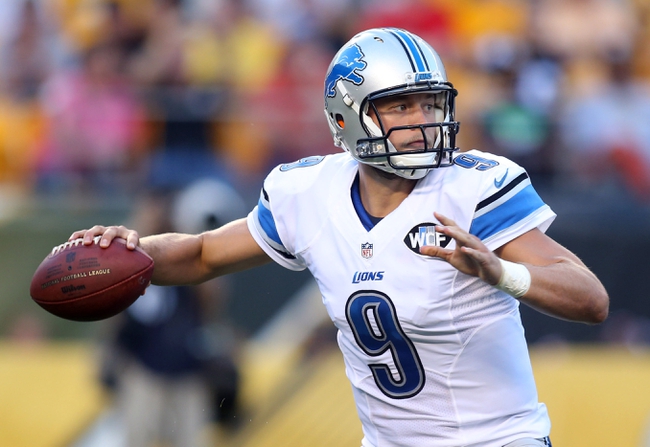 The Detroit Lions and the Cincinnati Bengals face off on Thursday at Ford Field for a week 2 NFL preseason battle.

The Detroit Lions are in rebuilding mode but they looked solid in week 1 of the preseason knocking off the Pittsburgh Steelers 30-17. Matthew Stafford saw limited action for the Lions in week 1 as the starting QB completed four of his six passes while Jake Ruddock was an impressive eight for 11 with a touchdown while Dan Orlovsky completed 16 of 25 passes for 164 yards with a touchdown and an interception. Zach Zenner led all Detroit rushers with 24 yards on seven carries while Stevan Ridley managed just 14 yards on five carries. Anquan Boldin caught his first pass as a Lion, Jeremy Kerley had five catches and Marvin Jones caught a pass. Defensively the Lions allowed 17 points and just 187 yards with four sacks and three fumble recoveries. Khaseem Greene led the Detroit defense with five tackles and sack, Antoine Williams had five tackles, and Kyle Van Noy was among those with three tackles. While we can’t gauge where teams really are in the preseason, we can gauge the enthusiasm and the Lions seem to have it.

The Cincinnati Bengals moved the football in their week one preseason matchup with the Minnesota Vikings, they didn’t finish some drives and that was the difference between losing and winning. Bengals starting QB Andy Dalton played a series completing four of five passes while backup A.J. McCarron completed 11 of his 16 passes with a touchdown while Keith Wenning and Joe Licata did nothing to distinguish themselves completing three passes each while throwing an interception each. Cincinnati’s Jeremy Hill was impressive running the football in limited action and Giovanni Bernard averaged 3.0 yards per carry and Cedric Peerman gained just 8 yards on 7 carries. Defensively the Bengals allowed 17 points and 274 yards with a sack and an interception. Nick Vigil led the Bengals defense with six tackles while P.J. Dawson and Marquis Flowers each had five tackles. The Bengals had their moments and their chances but they have some holes to fill and looked less concerned with winning than evaluating talent.

I think we see the defenses show up this time and with the total set at 40 I like the under.