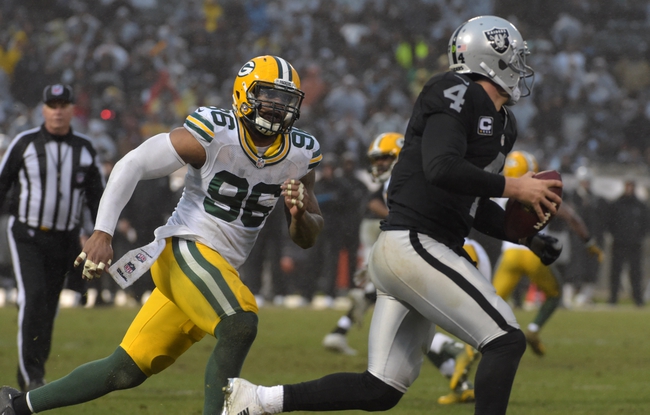 The Green Bay Packers and the Oakland Raiders face off on Thursday at Lambeau Field in week 2 NFL preseason action.

The Green Bay Packers finally got their preseason started after the cancelling of the Hall of Fame game the Packers knocked off the Cleveland Browns in Week 1. Packers QB Aaron Rodgers didn’t play in week 1 but he is expected to play in this one but Joe Callahan looked solid completing 69.6 percent of his passes with a touchdown while Marquise Williams ran as much as he threw. Eddie Lacy looked strong at RB as the Green Bay back averaged 6.0 yards per carry in limited action while Brandon Burks averaged 5.0 yards per carry and was the Pack’s leading ground gainer with 45 yards. The Packers targeted a slew of receivers and Justin Perillo had five catches but more notably Jared Abbrederis had two grabs as did Jared Cook. The Packers defense allowed just 11 points and 172 yards and had four sacks and an interception. Kentrell Brice had six tackles to lead Green Bay while Beniquez Brown and Joe Thomas each had four tackles. Like most preseason games the starters didn’t play much if at all so this week we should see more of the starters at least in the early going.

The expectations for the Oakland Raiders are high this season and they looked to be motivated as they blew out the Arizona Cardinals 31-10 in week one action. While the Raiders put up a lot of points, a lot of them were a result of defense and special teams plays setting up the offense so the offensive stats weren’t anything special. Derek Carr started at QB for Oakland but he never found a groove completing just three of his seven pass attempts as two of Matt McGloin’s five completions went for touchdowns and Connor Cook had the best numbers completing 63.6 percent of his passes. Laatavious Murray started in the Raiders backfield carrying the ball four times and DeAndre Washington’s eight attempts, for a 5.4 yards per carry average, were the most on the team, the most impressive back was George Atkinson who scored twice including one on a 53-yard burst. Michael Crabtree and Amari Cooper both started at WR with the Raiders first team but Marvin Hall was the leading receiver with three catches. Defensively the Raiders allowed 383 yards but just 10 points with one sack, one fumble recovery, and two interceptions but the tackling still has to be a concern. Korey Toomer was everywhere for Oakland tallying nine tackles while James Cowser, Cory James, and Leon Orr had five tackles each. The Raiders will need to tackle better in this one and the first team offense is going to have to be better if they hope to be a playoff team.

The total is set at 42.5 and this just looks like a big number so I am going to take the under which like most preseason picks is a lean at best.