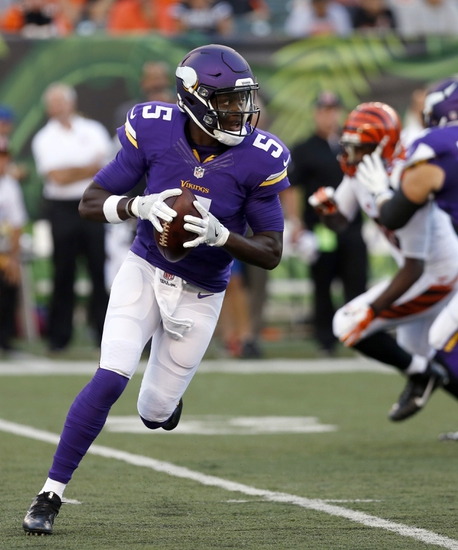 The Minnesota Vikings make the journey out west to Century Link Field take on the Seattle Seahawks in week 2 preseason action.

The Minnesota Vikings went into Cincinnati on Friday and took a narrow 17-16 victory over the Bengals into week 2. Starting QB Teddy Bridgewater was outstanding in his preseason debut, going 6-7 for 92 yards and a touchdown. However we also got our first taste of Minnesota’s first round draft pick, Laquon Treadwell out of Ole Miss. Treadwell also had a good game, compiling 41 yards on 4 receptions and I’m willing to bet that Treadwell will join Ezekiel Elliott in Dallas as early favorites for Offensive Rookie of the Year. Adrian Peterson was held out of this game, and will most likely be held out of all of Minnesota’s preseason games this year in an effort to keep AP fresh and ready to go at 100% this season. The void of AP in the preseason is clear with Minnesota only putting up 56 rushing yards against Cincinnati, however the Vikings balanced that out by putting up 218 passing yards.

The Seattle Seahawks also won by a 17-16 score defeating Kansas City on a last second touchdown from TCU rookie Trevone Boykin to Tanner McEvoy and was capped off by a dramatic 2 point conversion to win the game, which we likely saw because it is still the preseason. However that doesn’t take away from the fact that Seattle scored 11 unanswered 4th quarter points to escape with a victory. The victory was one of few bright spots for Seattle however, as starting QB Russell Wilson went a mediocre 3-6 for 34 yards and an interception. Even though Boykin saved the game for Seattle at the end of the game, he still didn’t look great. Although Boykin threw for 177 yards, it was clear that Boykin was struggling against second-stringers and even a couple third-stringers. Christine Michael is showing signs of life, putting up 44 yards on 7 attempts as the majority of Seattle’s running back group was held out due to rest/injury. Seattle did have one of the more impressive total offensive performances this week, Putting up 358 yards of total offense, with 248 of those 358 coming through the air.

These teams both played nailbiters in week 1, so why not another in week 2? I like Minnesota a lot more than Seattle right now, mainly because Russell Wilson isn’t playing great and the backups behind him are even worse. I think this game will comedown to a last second field goal, so give me the free field goal with Minnesota.

The pick in this article is the opinion of the writer, not a Sports Chat Place site consensus.
Previous Pick
Cleveland Browns vs. Atlanta Falcons - 8/18/16 NFL Pick, Odds, and Prediction
Next Pick
Montreal Alouettes vs. Ottawa Redblacks CFL Pick, Odds, Prediction - 8/19/16