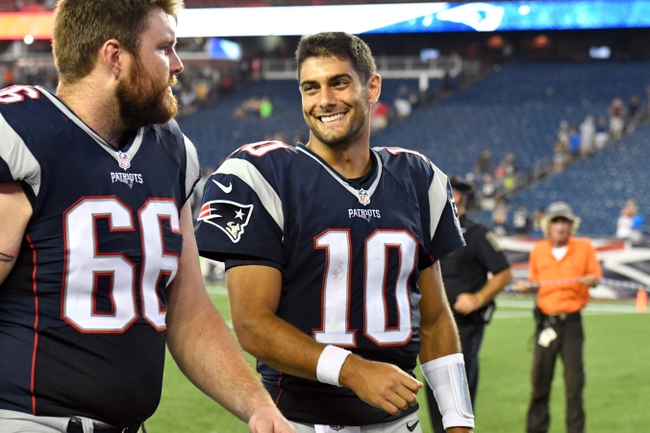 The Chicago Bears have nowhere to go but up after losing to the Broncos, 22-0 in their preseason opener. In the losing effort, Brian Hoyer led the way with 81 passing yards and one interception. Jay Cutler should get some reps after throwing just four passes in game one. Deonte Thompson and Joshua Bellamy combined for 59 receiving yards on five catches while Jacquizz Rodgers had two receptions. The Chicago Bears ground game averaged 2.8 yards per carry and Connor Shaw led the charge with 14 yards on two carries. Defensively, Lamin Barrow led the Bears with six tackles, Cornelius Washington had one sack and Bryce Callahan had one pass deflection.

The New England Patriots look to build on their 34-22 preseason opening win over the Saints. In the victory, Jimmy Garoppolo led the way with 168 passing yards on 11 completions. Garoppolo will continue to get a ton of reps with him being pegged the starter until Tom Brady returns. James White and Malcolm Mitchell combined for 111 receiving yards on five catches while AJ Derby had three receptions. The New England Patriots ground game averaged five yards per carry and Tyler Gaffney led the charge with 64 yards and one touchdown. Defensively, Trey Flowers led the Patriots with six tackles, Geneo Grissom had one sack and Jonathan Jones had one pass deflection.

There's nothing better in preseason than stability and guys you know who are going to play a lot. We know Garoppolo is going to continue getting big boy reps due to him having to start the first four games. It's a lot easier to put points on the board when it's one guy playing multiple drives. Also, the Bears were awful in their first game.

Give me the Pats at home.