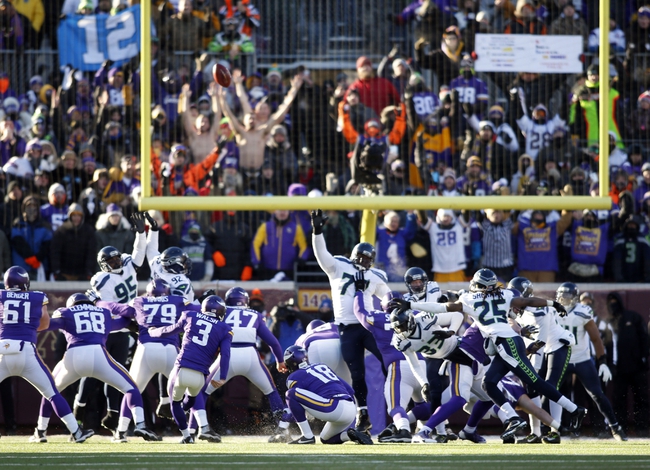 The Seattle Seahawks and the Minnesota Viking face off on Thursday in a week 2 NFL preseason matchup.

The Seattle Seahawks are looking to get back to the Super Bowl this season and if their first week of preseason meant anything at all luck appears to be on their side. Seahawks QB Russell Wilson didn’t play much in week one completing just 50 percent of his passes with his last one being intercepted deep in Kansas City Chiefs territory while Jake Heaps was unimpressive but Trevone Boykin completed 61.5 percent of his passes for 188 yards and he threw the game winning touchdown pass from 37 yards out with just four seconds left in the game. Christine Michael was impressive anchoring the Seattle running game with a 6.3 yard per carry average while none of the other backs did much to impress. Doug Baldwin had two catches and Tanner McEvoy led all Seahawks receivers with three catches for 77 yards including the game winning touchdown and Uzoma Nwachukwu and Paul Richardson each had three catches. The Seattle defense allowed 16 points and 329 yards with an interception. Steven Terrell and Cassius Marsh tied for tops in tackles for the Seahawks with four each while Tyvis Powell grabbed the interception. The Seahawks got the win in week one and while we didn’t see much of the starters, this team will have to play better if they hope to continue winning.

The Minnesota Vikings are looking to build themselves into a contender and if week one of the preseason was any indication it is going to be through high percentage passing and hard hitting. Viking starting QB Teddy Bridgewater completed six of his seven passes with a touchdown but he was sacked twice while Shaun Hill was also six of seven and Joel Stave completed eight of 13. Adrian Peterson didn’t play so C.J. Ham was Minnesota’s leading ball carrier with 35 yards and Jerick McKinnon had 14 yards but no one was impressive running the football. Vikings first round draft pick Laquon Treadwell had four catches, David Morgan had three catches, and Charles Johnson had one catch but it was a 49 yarder from Bridgewater that went for a touchdown. The Vikings defense allowed 16 points and 339 yards and they had two sacks and two interceptions. Emmanuel Lamur led Minnesota with eight tackles, Jayron Kearse had five tackles and an interception, and Xavier Rhodes had three solo tackles. The Vikings appear to have a game plan but we have yet to see their best player, Peterson, even hit the field.

Like a lot of preseason games this one looks to be close enough so taking the points here seems to be a solid play.

The pick in this article is the opinion of the writer, not a Sports Chat Place site consensus.
Previous Pick
Cleveland Browns vs. Atlanta Falcons - 8/18/16 NFL Pick, Odds, and Prediction
Next Pick
Montreal Alouettes vs. Ottawa Redblacks CFL Pick, Odds, Prediction - 8/19/16