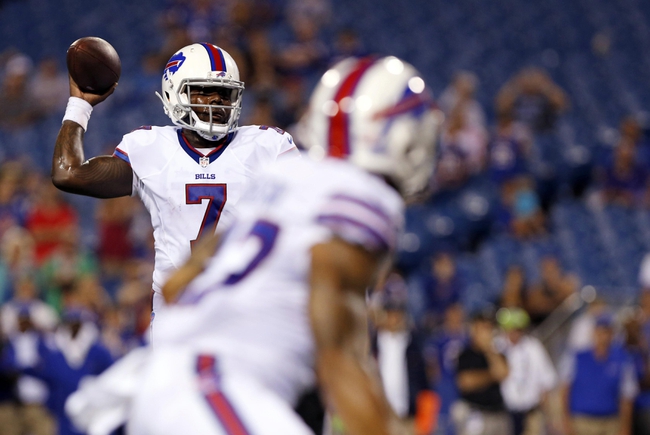 The New York Giants hope to bounce back after losing their preseason opener to the Miami Dolphins, 27-10. In the losing effort, Ryan Nassib led the way with 75 passing yards and two interceptions. Eli Manning should get a decent workload after sitting in the loss. Sterling Shepard and Geremy Davis combined for 45 receiving yards on three receptions while Dwayne Harris had one reception. The New York Giants ground game averaged 4.9 yards per carry and Andre Williams led the charge with 41 yards on nine carries. Defensively, B.J. Goodson led the Giants with eight tackles, Greg Milhouse had one sack and Jonathan Casillas had two pass deflections.

The Buffalo Bills look for their first preseason win after losing 19-18 to the Indianapolis Colts. In the losing effort, Cardale Jones led the way with 162 passing yards and one touchdown. Tyrod Taylor, who just received a huge extension, had two completions on three pass attempts. Walter Powell and Nick O'Leary combined for 127 receiving yards on six catches while Jarrett Boykin had two receptions. The Buffalo Bills ground game averaged 4.5 yards per carry and Jonathan Williams led the charge with 44 yards on eight carries. Defensively, Preston Brown led the Bills with four tackles, David Hawthorne had one tackle for loss and Duke Williams had two pass deflections.

Even with Manning getting reps in this game, the Giants backups did nothing against the Dolphins last week. Also, the Bills have a deep group of quarterbacks that can put points on you in a hurry. Jones looked great in his role. I'm siding with Buffalo and the small line, and this is one of the stronger plays of this week.

The pick in this article is the opinion of the writer, not a Sports Chat Place site consensus.
Previous Pick
Tennessee Titans vs. Carolina Panthers - 8/20/16 NFL Pick, Odds, and Prediction
Next Pick
Saskatchewan Roughriders vs. Hamilton Tiger-Cats CFL Pick, Odds, Prediction - 8/20/16