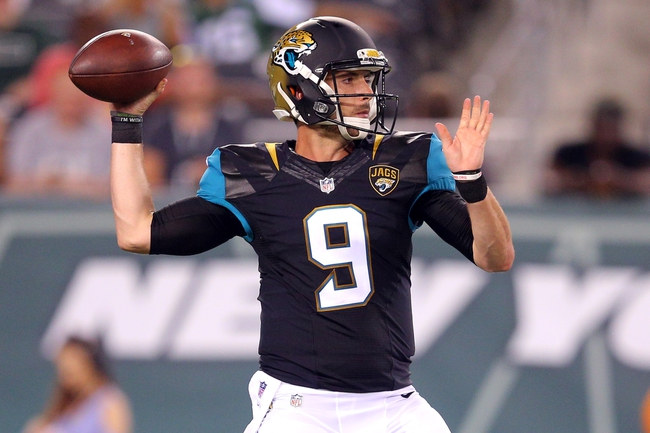 The Tampa Bay Buccaneers and Jacksonville Jaguars meet Saturday in a preseason game at EverBank Field.

The Tampa Bay Buccaneers look for a bounce back performance after losing their opener 17-9 to the Philadelphia Eagles. In the losing effort, Ryan Griffin led the way with 148 passing yards and two interceptions. Jameis Winston looked sharp with seven completions on nine pass attempts. Russell Shepard and Bernard Reedy combined for 94 receiving yards and one touchdown while Storm Johnson had two receptions. The Tampa Bay Buccaneers ground game averaged 1.5 yards per carry and Doug Martin led the charge with 13 yards on five carries. Defensively, Luke Rhodes led the Buccaneers with five tackles, Howard Jones had one sack and Johnthan Banks had one pass deflection.

The Jacksonville Jaguars also look for their first preseason win after losing 17-13 to the New York Jets. In the losing effort, Brandon Allen led the way with 138 passing yards and one interception. Blake Bortles was also solid with six completions on seven pass attempts. Allen Robinson and Marqise Lee combined for 129 receiving yards on seven catches while Neal Sterling had three receptions. The Jacksonville Jaguars ground game averaged 3.8 yards per carry and Chris Ivory led the charge with 26 yards and one touchdown. Defensively, Telvin Smith led the Jaguars with five tackles, Bjoern Werner had one sack and Aaron Colvin had one pass deflection.

The Bucs were sloppy in their preseason opener and struggled to move the ball all night. The Jags at least had drives where they moved the ball and could finish with points. Also, Jacksonville is a very young team with a lot of guys fighting for key roster spots. I like teams like Jacksonville in the preseason, which is why I'm taking the home team and small line.

The pick in this article is the opinion of the writer, not a Sports Chat Place site consensus.
Previous Pick
Saskatchewan Roughriders vs. Hamilton Tiger-Cats CFL Pick, Odds, Prediction - 8/20/16
Next Pick
Houston Texans vs. New Orleans Saints - 8/20/16 NFL Pick, Odds, and Prediction